From Genesys Documentation
Jump to: navigation, search
This topic is part of the manual Designer User's Guide for version Current of Routing.

Use this block to read and write data that can be accessed from both inside and outside the application.

You can add the Call Data block to an application when you want to read and write data that can be accessed from both inside and outside the application.

You can add the block to the Self Service or Assisted Service phase, but the block can behave differently depending on the phase in which it is used. These differences are noted where applicable so be sure to review the information carefully when setting up the block.

The data format consists of key-value pairs (KVP). That is, for every key in the call data, you can associate a value with it. This value can be represented as an integer, character string, binary (boolean) type, or as a list of KVPs (see an example of how to do this).

There are certain variable names used by the Designer application that must not be updated by the Call Data block. See Restricted Variable Names for a list of these variable names.

When entering values, you must escape quote characters in values by using a preceding backslash. For example:

The Call Data block only accepts string type keys and values, so you do not need to enclose these values in single quotes.

Use the Read Data tab to specify keys to be read from Call Data and stored into application variables. You can toggle the key being read between a variable and a string.

If this block is in the Self Service phase, use the Edit Data tab to specify key-value pairs to be written to the call data (see an example).

When used in Self Service, the Call Data block has the following restrictions:

You can specify literal or variable values (or a combination) for each KVP, using one of the following options:

You can also enter literal values for both Key and Value. In this case, the entries are not required to match; each value is written to the call data as specified:

If using a literal value for Key and specifying a variable for Value, make sure that the name of the variable you select does NOT match the entry provided for Key: 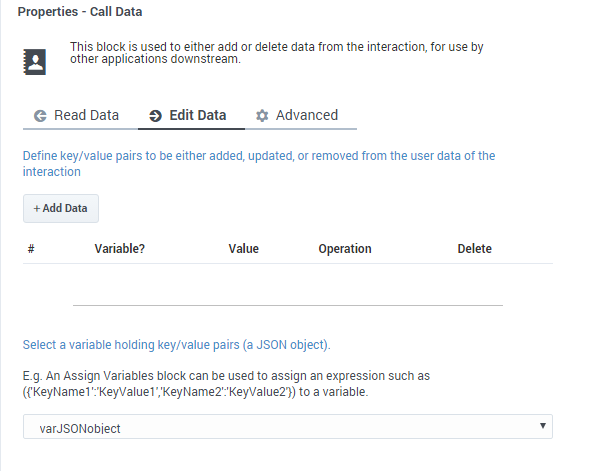 If you want to use a variable for the Key or Value, select the Variable checkbox and then select a variable from the drop-down menu. If the Value is an integer, select the Integer checkbox.

You do not need to enclose extension values in quotes. However, if the quote is part of the value, you must escape the quote character by using a preceding backslash (see Syntax requirements).

Important
Designer displays an error message if Extension Data is added, but the Key and Value settings are not defined.
This example shows a few different ways that key-value pairs can be added as extensions:

For this example, we want to use the Call Data block to specify a key-value pair to be written to the call data. We've created a variable called CustomerSegment that Designer will use to store the segment detail about the customer (for example, Bronze) and we want to associate its value with the segment key in the call data.

On the Edit Data tab, we'll click Add Data to specify a new key-value pair. For the Key field, we'll enter segment. For the Value, we'll enable the Variable checkbox and select the CustomerSegment variable we created earlier.

This example shows how you can assign the value of a key-value pair in the Call Data block to a variable in the Assisted Service phase.

First, initialize your variables as various data types (integer, character string, binary [boolean], and so on), and create a variable for your key-value pair (in this example, we are using var_kvp): 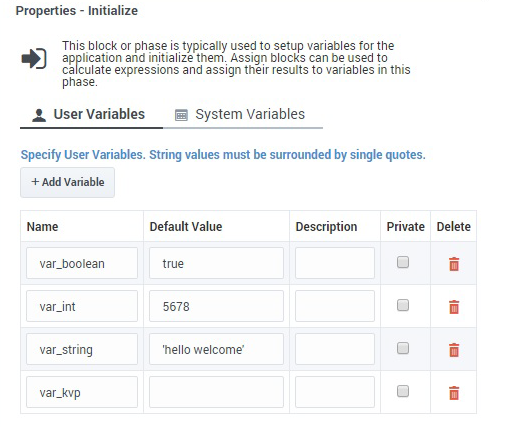 Next, initialize a variable as a list of kv-pairs using the Assign Variables block. This example shows this using an ECMAScript on the Advanced Scripting tab:

Finally, add the user data as a key-value pair in the Call Data block: 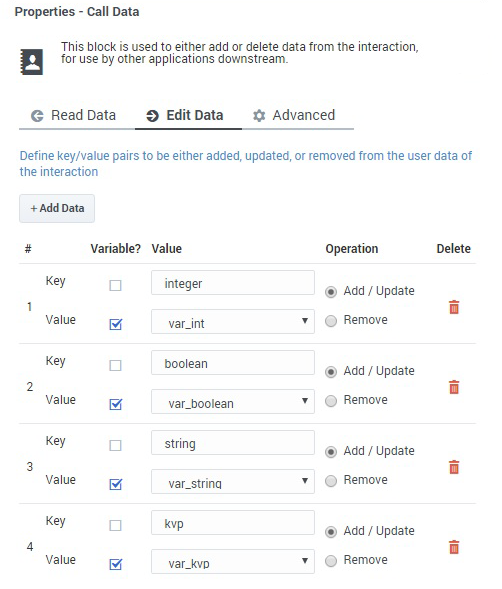 If you want to add or delete several (i.e. 30 or more) key-value pairs, you can use the Advanced Scripting tab of an Assign Variables block to create a JSON object that lists each of the keys you want to modify.

For example, to remove a large amount of key-value pairs, create a script that assigns each key a 'null' value. In this example, we've defined an object called jsonData and assigned each of its keys a value of null:

If you wanted to add/update the keys, simply use the script to assign the desired values to each key. You can then reference this JSON object as a variable in the Call Data block to perform the desired operation:

Note that the operations are processed in smaller batches, to prevent too many requests from being processed at one time.

Tip
This method can be used in conjunction with the standard key-value pair operations described in Edit Data tab
.

The following variable names are used by the Designer application and must not be updated by the Call Data block.

The addition, updating, and removal of Call Data do not happen instantaneously while the application is running. The application starts the operation to edit the Call Data, and then continues to the next block, without waiting for confirmation that the Call Data is successfully modified.

Thus, there is no guarantee that the "write" operation has finished—a subsequent "read" operation could potentially give you either an old value or an updated value on different runs through the application.

For this reason, Genesys recommends that you do not write a key-value pair and then attempt to read back the same key from the Call Data within an application. If you need to access a Call Data value that was already edited within the application, Genesys recommends that you use the corresponding application variable.
Retrieved from "https://all.docs.genesys.com/PEC-ROU/Current/Designer/CallData (2021-02-26 21:07:14)"
Category:
Download a PDF