The Feature Analysis report provides a starting point for the process of creating Predictors and Models. It enables you to determine which factors—agent and customer characteristics and behavior—have the most impact on a target metric you select.

About the Feature Analysis report

Feature Analysis is run on a Dataset (from the Datasets tab). It considers all features in the Dataset.

The Feature Analysis report returns only those features (also referred as attributes) that most influence the target metric. The features are ranked, from the one with the strongest impact on the target metric to the one with the least. Each subsequent feature is ranked in relation to the most powerful one. Therefore, a feature with a numeric ranking of 0.5 is half as powerful as the highest-ranked feature.

Although not all features are shown by default, the report does contain data for all features. If a feature has minimal impact, it does not affect the outcome of the report.

Alissa's business is plagued with escalations and frustrated customers who have to contact their agents multiple times to resolve issues. She needs to improve first contact resolution, but a scan of the data leaves her confused. Each case seems so different. How can she tell what aspects of the environment to target for quick, lasting results?

Alissa starts by compiling and importing a high-quality Dataset. She makes sure of the following points about her Dataset:

With the data in place, Alissa runs a Feature Analysis report using FCR as the target metric.

The outcome lists the Dataset fields having the strongest effect on FCR. The feature, or aspect of the environment, having the greatest impact on FCR is listed first and given a weight of 1. All other features are compared with the highest-ranked feature and given a ranking that expresses how strongly they affect the target metric relative to the top feature. If a feature has a value of 0.75, that means it has 3/4 as much impact as the top feature.

Now that Alissa know which are the most critical features in her environment, she can use this information to construct a better Models for the predictor in her environment Predictor that uses FCR as the target metric. Although the Predictor includes all features, when Alissa creates Models based on the Predictor, she configures them with only those features that the Feature Analysis report identified as most important.

Alissa takes the top ten features as a starting point for her first Model. She knows that if she selects only some of the high-ranked features—the features ranked, for example, at 1, 3, 4, and 6—she will be second-guessing the algorithm. The Feature Analysis accounts for the fact that the features can be interrelated and affect each other. If Alissa arbitrarily selects only a few of the top features, her Model will be weaker and less accurate than it should be.

So, by using the results of the Feature Analysis report, Alissa removes features that are minimally relevant from her Model, enabling her to focus on the key factors. She can create and run Models efficiently, with less load on her system. She can also target her company's efforts to allocate resources and provide training toward those areas that will drive the greatest improvements to the target metric.

After configuring her company's routing strategies to use baseline routing for some interactions and using GPR for the rest, Alissa can perform a real-world A/B test of how well GPR performs over time when compared against the baseline routing without GPR. With at least three months' worth of data, she can see the real-world results. She runs a Predictive Routing A/B Testing Report in Genesys CX Insights, using Genesys Historical Reporting.

However, she's careful to monitor whether there are changes to the Dataset that affect the environment in ways that make it necessary to create a train a new Model. For example, changes in the environment that might cause features to gain or lose importance in how much they affect the target metric. After new data is appended to the Dataset, and obsolete data purged, Alissa can repeat the steps to regenerate Predictor data, run a new Feature Analysis report, and then create and train new Models.

For example, Alissa's company has created a new IVR flow that directs certain types of challenging interactions to a new agent group that is specially trained to handle such issues. By rerunning the Feature Analysis report based on the new conditions in the environment, Alissa can quickly gather better insight on how to set up new Models to replace the now-outdated ones.

How to generate a Feature Analysis report 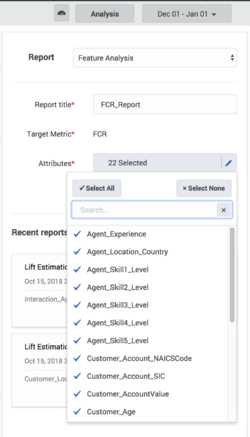 The result appears on the Reports tab.

The Feature Analysis report uses two types of analysis depending on the target metric type:

Target Metrics <metric_name> Range: Appears only if your target metric is numeric. The Target Metric Ranges slider converts a numeric—regression—metric into a classification metric. For example, if you have a numeric metric with a range from 0-10, you can adjust the slider to divide the outcome results into two or three classes or buckets. You might move the buttons to create one bucket from 0-3, one from 4-6, and one for 6 and higher. To create two buckets, leave one button at the far end of the slider and use the other to divide the bar.

Attributes: When you are setting the report parameters, all features/attributes are available for selection. Selected attributes have a check mark next to the name. Click the attribute to toggle the check mark on or off. To add all or remove all, click Select All or Select None. 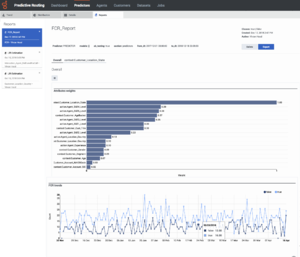 To view a report:

The report window is large and contains a number of sections and options for how to view the analysis results. The thumbnail on the right shows the entire window, for your reference (click to enlarge it). The sections that follow explain the report display, section by section.

By default, the report opens showing an Overall view of the data. All attributes (features) you selected for the report and which have a relative weight greater than one-half percent (0.5%) are listed on tabs under the report name, so you can view analyses of the data for each feature.

The button at the top left of the graph enables you to toggle between the chart view (shown here) and a tabular view. 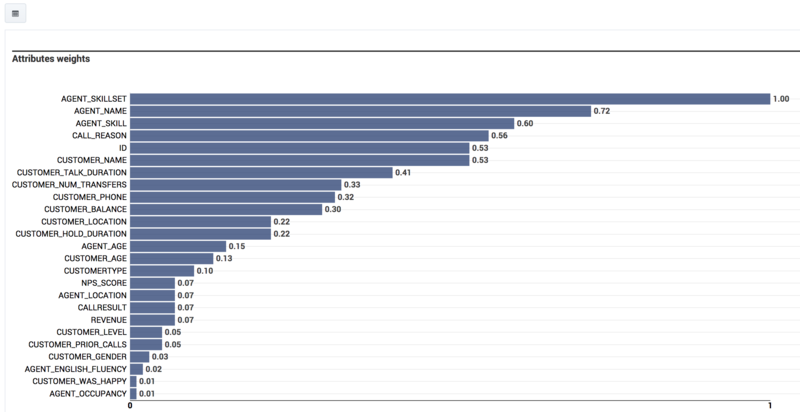 Important
If the Dataset you are using to run the report has more than 100,000 samples for a feature, GPR samples the rows for that feature randomly. As a result, in such cases, the Feature Analysis report might produce slightly different results when running the report on the same Dataset with the same parameters selected.

Click a tab for a specific feature on the top section of the report to view a chart displaying data for that feature only.

Click the bar on the graph for a feature with a weight less than 0.5 (that is, for which a tab is not generated by default) to have a new tab open showing a chart of that feature. Note that this tab is displayed only until you navigate away from it.

In the Overall view, the second chart shows the target metric values over time.