Learn how to use various advanced input techniques to modify data when creating data mapping schemas.

Periodically, to achieve your goals when creating data mapping schemas for input files, data must be modified when it is loaded. The technique used to alter data during import is called preprocessing.

This section explains the tips and techniques used to achieve some of the more common preprocessing requests.

When using an input specification file, the pre-process lines in the input spec must appear before everything else that is grabbed. 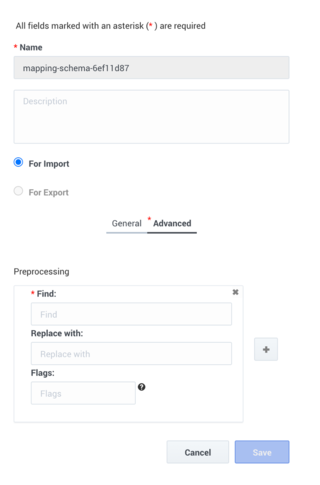 The following statement should be used when searching for occurrences of case insensitive data, and it can significantly reduce the number of required preprocessing statements.

For example, the statement below will find and replace instances of dr, Dr, DR, and dR.

# Pull out Dr from address and replace with Drive

# Pull out St from address and replace with Street

The following preprocess statements are examples of how it is possible to convert some of these abbreviations (in this case, the 6th comma-separated field), into what they should be.

To perform this type of abbreviation replacement on a fixed width file, you should perform the following so that you do not encounter a situation in which data will be replaced with variable length words.

In the following example, specific abbreviations with specific amounts of space around them are replaced with the a specific amount of space with the addition of words at the end of the record. For example, if you insert an address in a field, you will pull the old street address, skip a bunch of characters that would normally bring you directly to the end of the record, and finally grab the amount of characters that you added at the end. For instance, note that the word replacements in the above example are all 9 characters long.

# Remove ND only if it is preceded with a number. As a result, SECOND does not become SECO

# Remove TH only if it is preceded with a number. As a result, NORTH does not become NOR

In the following table, TH or ND are removed from an address so that 19th street is replaced with 19 street.

Replace Text With Something Else

Use pre process to format any part of the data file before the rest of the input spec looks at the data file.

In the first example, an attempt is made to verify if either one of the telephone fields only includes zeros. If it does only include zeros, the zeros will be replaced by the number 9.

In the second example, an attempt is made to verify if one of the calling fields only includes zero. Both the first and second examples should be used together to avoid records being rejected.

In the third example, the delimiter is changed. It is possible to use this example in various ways to show a field with its own special delimiter, appear as its own field.

In the fourth example, a static value is replaced with a different value.

# Find a value and change it

Add Fields After an Entire Record

# Add a campaign name to the end of a record

# Add a campaign name to the end of a record

# Add fields when you see specific numbers in a specific position

Past Custom Example - Force Variable-Length Field to Trim or Pad

Grab Required Data Even If Records Are Not The Same Length


Using preprocessing, the solution adds extra fields to all records. In the preprocess statement above, there are 10 spaces between each comma. The length of a record row is not significant as long as the rightmost field the system is trying to grab can be grabbed (For example, in this case the cell phone number in the 5th field).

Therefore, by adding empty fields to all the rows, all possible data situations are satisfied. If there is only 1 phone number, extra fields are added to allow the Work and Cell grabs to work as expected. If there are only have 2 phone numbers, the extra fields are added to allow the Cell grab to work as expected. When all 3 numbers are available there is no significance to appending blank fields at the end of the row since they are already referenced.


When importing into an Other field, the date format for the date format should be MMddyyyy. In this example, the preprocess removes the slashes from the date. Three preprocess lines are required to handle the possible month or day single digit scenarios. The result is that the dates are all the same and do not include slashes. The plus character (+) is added to the preprocess statement to enable slashes within the statement.

Replace More Than One Instance Of Something

In the following example, the client wanted to remove the asterisks from their data and replace it with spaces. Each record could contain one or two stars depending on how many names were in the record. Example data:
Joe A*Schmoe Lucy K*Schmoe 6031231234 12345

In the following example, there is no delimiter, commas in the name field, and the second name fields are predominately empty. The second name field is 40 bytes long and since the system needs to skip 62 bytes, a pipe must be seeded at byte 103 to use as a reference point later on.

Some data includes commas in business names. Typically, the <CSV> technique is used to remove the commas, but occasionally the data must be preprocessed. The following is an example of removing the commas using preprocessing. In this example, the field in question is the 3rd field. Anytime commas are embedded in a field, double quotes are entered around the field. In this example, the 3 lines will remove instances of 3 commas, 2 commas, or 1 comma respectively in that field. Since ampersands have been entered in the business names and it is important to keep them, the ampersands are included as part of the character classes for the match (word characters, white space characters, and ampersands).

Add Static Values to Variable Length Records in One Field

In this scenario, the client must add a static value to the end of all records, based on a specific flag. For example purposes, refer to the Add some fields after an entire record section above.

When static values are added to variable length records in one field the record appears as follows (for example, Test Camp is added at the end of all records with a colon delimiter ahead of it):
TEST,20408,TEST2:Test Camp

Using a unique delimiter with this static value for all records, enables you to locate specific information within the record.

This technique can only be used if the secondary delimiter is not used anywhere else in the original data file.

In the example below, the second field and the added campaign value are merged into a single field.

You can use regular expression (RegEx) in your data mapping schema when it includes importing devices greater than 1 to 10. CX Contact uses this functionality to extend the supported maximum of 10 devices.

For example, because there are only 10 supported device fields in the mapping schema, device11 and device12 might not be imported into CX Contact. However, fields 1 to 10 do not always contain devices—typically, some fields are left empty. By creating a regular expression, you can map device11 and device12 to the first and second empty field, so that they are imported along with all other devices. See the example below and in the tables (where D1 = device1, D2 = device2, and so on).

# Use regular expression to include additional devices

In the current format (below), device 11 and 12 can remain mapped to their user-defined fields and labelled appropriately for reporting purposes.

Therefore, in the following case:

You would use the following find/replace values to pull Device11 to Device1 (if Device11 exists and Device1 is empty).

To pull Device12 to Device1 (if Device12 exists and Device1 is empty):

Retrieved from "https://all.docs.genesys.com/PEC-OU/Current/CXContact/AdvInput (2023-02-06 13:51:47)"
Category:
Comments or questions about this documentation? Contact us for support!
Download a PDF