Upgrade, roll back, or uninstall

From Genesys Documentation
Jump to: navigation, search
This topic is part of the manual Genesys Callback Private Edition Guide for version Current of Callback.

Find out what to do before deploying Genesys Callback.

Genesys Engagement Service (GES) is the only service that runs in the GES Docker container. The Helm charts included with the GES release provision GES and any Kubernetes infrastructure necessary for GES to run, such as load balancing, autoscaling, ingress control, and monitoring integration.

For information about how to download the Helm charts, see Downloading your Genesys Multicloud CX containers.

See Helm charts and containers for Callback for the Helm chart version you must download for your release.

The primary contributor to the size of a callback record is the amount of user data that is attached to a callback. Since this is an open-ended field, and the composition will differ from customer to customer, it is difficult to state the precise storage requirements of GES for a given deployment. To assist you, the following table lists the results of testing done in an internal Genesys development environment and shows the impact that user data has when it comes to the storage requirements for both Redis and Postgres.

Note: This is 100k of randomized string in a single field in the user data.

Genesys strongly recommends the following hardware requirements to run GES with a single tenant. The requirements are based on running GES in a multi-tenanted environment and scaled down accordingly. Use these guidelines, coupled with the callback storage information listed above, to gauge the precise requirements needed to ensure that GES runs smoothly in your deployment.

(Based on cache.r5.large) Redis is essential to GES service availability. Deploy two Redis caches in a cluster; the second cache acts as a replica of the first. For more information, see Architecture.

Each callback record (excluding user data) requires approximately 4.5 to 5.5 kB of Redis memory, plus an additional 1.25 kB for each kB of user data.

Use the following formulas to estimate disk storage and Redis memory requirements:

For example, if a tenant has an average of 100,000 callbacks per day with 1kB user data in each callback:

The Redis operations primarily update the connectivity status to other services such as Tenant Service (specifically ORS and URS) and Genesys Web Services and Applications (GWS).

When GES is idle (zero callbacks in the past, no active callback sessions, no scheduled callbacks), GES generates about 50 Redis operations per second per GES node per tenant.

Each Immediate callback generates approximately 110 Redis operations from its creation to the end of the ORS session.

For Scheduled callbacks, assuming each callback generates 110 Redis operations when the ORS session is active (based on Immediate callback numbers), there is 1 additional Redis operation for each minute that a callback is scheduled.

For example, if a callback is scheduled for 1 hour from the time it was created, the number of Redis operations is approximately 60 + 110 = 170.

For a callback scheduled for 1 day from the time it was created, it generates approximately 60 × 24 + 110 = 1550 Redis operations, using the following formula for the number of Redis operations per callback:
<number of callbacks> × (110 + <number of minutes until scheduled time>)

Because the longevity of a callback ORS session depends on the estimated wait time (EWT), the total number of Redis operations performed by GES per minute varies, based on both the number of callbacks in the system and the EWT of the callbacks.

For example, let's say we have the following scenario:

Using the preceding formulas, estimate the Redis operations per minute:

Each callback creates three additional Redis keys. Given the preceding calculations for Redis memory requirements for each callback, the formula for the average key size is:
(5.5 kB + (1.25 kB × <kB_of_user_data_per_callback>)) / 3

The diagram below shows the incoming and outgoing connections amongst GES and other Genesys and third-party software such as Redis, PostgreSQL, and Prometheus. In the diagram, Prometheus is shown as being part of the broader Kubernetes deployment, although this is not a requirement. What's important is that Prometheus is able to reach the internal load balancer for GES.

The other important thing to note is that, depending on the use case, GES might communicate with Firebase and CAPTCHA over the open internet. This is not part of the default callback offering, but if you use Push Notifications with your callback service, then GES must be able to connect to Firebase over TLS. The use of Push Notifications or CAPTCHA is optional and not necessary for the basic callback scenarios. 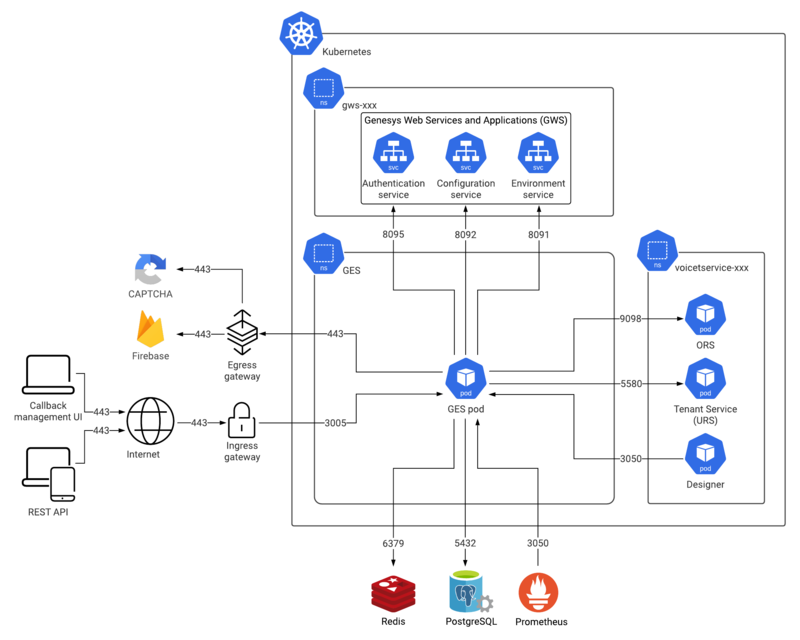 Information in the following sections is based on NGINX configuration used by GES in an Azure cloud environment.

When interacting with the UI, GES and GWS ensure that the user's browser has the appropriate session cookies. By default, UI sessions time out after 20 minutes of inactivity.

The external Engagement API does not require session management or the use of cookies, but it is important that the GES API key be provided in the request headers in the X-API-Key field.

For ingress to GES, allow requests to only the following paths to be forwarded to GES:

In addition to allowing connections to only these paths, ensure that the ccid or ContactCenterID headers on any incoming requests are empty. This enhances security of the GES deployment; it prevents the use of external APIs by an actor who has only the CCID of the contact center.

There are no special TLS certificate requirements for the GES/Genesys Callback web-based UI.

There are no special requirements for sizing or creating an IP subnet for GES above and beyond the demands of the broader Kubernetes cluster.

The Genesys Callback user interface is supported in the following browsers.

GES has dependencies on several other Genesys services. You must deploy the services on which GES depends and verify that each is working as expected before you provision and configure GES. If you follow this advice, then – if any issues arise during the provisioning of GES – you can be reasonably assured that the fault lies in how GES is provisioned, rather than in a downstream program.

GES/Callback requires your environment to contain supported releases of the following Genesys services, which must be deployed before you deploy Callback:

Callback records are stored for 14 days. The 14-day TTL setting starts at the Desired Callback Time. The Callback TTL (seconds) setting in the CALLBACK_SETTINGS data table has no effect on callback record storage duration; 14 days is a fixed value for all callback records.

Retrieved from "https://all.docs.genesys.com/PEC-CAB/Current/CABPEGuide/Planning (2023-02-09 02:29:59)"
Categories:
Comments or questions about this documentation? Contact us for support!
Download a PDF