Use the Callback Queues page in the Callback UI to find information about each configured queue and to add capacity or country and number validation rules to queues.

For your reference, in addition to providing access to the Callback Queues page, the Tools tab includes the following menu options:

The Callback Queues page includes information for each queue such as Estimated Wait Time (EWT) and the number of callbacks in queue.

Tip
On the Callback Queues page, the Estimated Wait Time is the EWT used for callback calculation; it might not always match the EWT returned by the EWT API.

Icons beside each queue's name indicate whether the queue accepts Immediate (

The Callback Queues page pulls data when you first open the page, but does not continually check for new data. To update the data for a specific queue, click Refresh for that queue. When you click Refresh at the top of the page, it refreshes the data for every queue.
Tip
If you provision a virtual queue for callbacks in Designer while you are logged in to the Callback UI, be aware that the new queue might not display on the Callback Queues page until you log out and log in again because Callback fetches virtual queue permissions data only at login. In other words, Callback determines which virtual queues you have access to when you are logging in, and only then. 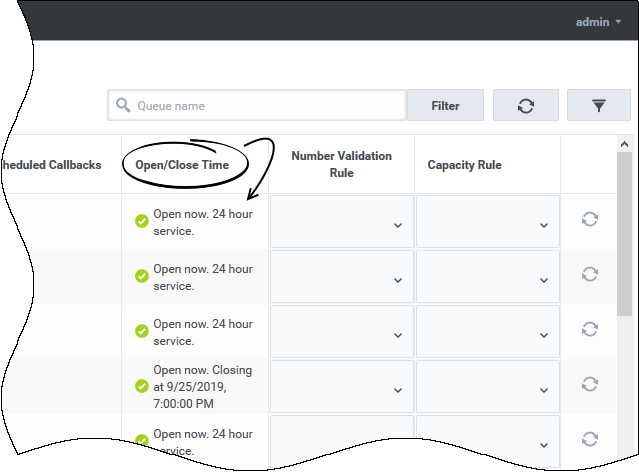 The Callback Queues page provides information about Open and Close times for each queue. The time displayed is based on the time zone configured for the device that you are using to access the Callback UI.

On the Callback Queues page, it is sometimes helpful to reduce the list to only one queue or a few queues for which you want to find information.

To filter the list, enter a queue name or part of a queue name in the field at the top of the page and click Filter. Using this method, you can filter the list of queues using only one criterion at a time. For example, let's say that you enter Sales in the field and click Filter. Any queue that includes Sales in its name will display. If you clear Sales from the field and filter on the word Service, then all queues that have Service in their name display, replacing the list of Sales-related queues.

Alternatively, when the specific queues that you want to view on the Callback Queues page have dissimilar names, use the Filter Displayed Queues dialog. From the list of virtual queues in the dialog, select those that you want to display. If you have a lot of queues, use the filter at the top of the dialog to help you find the ones that you are looking for. 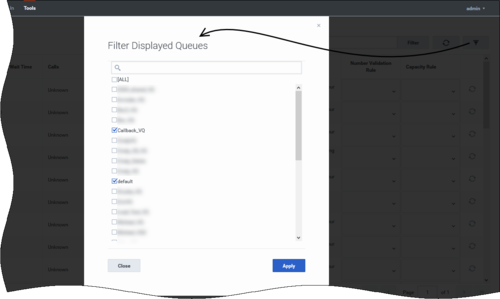 In addition to filtering, you can also click the Queue column heading to sort data based on that column. 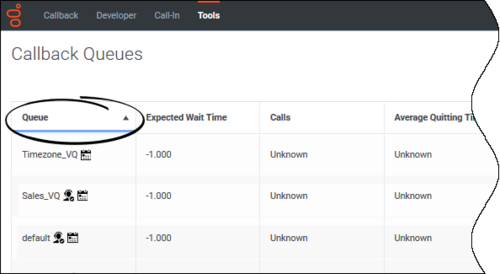 The Tools tab includes menu options to configure the following types of rules, which you can then assign to queues:

Retrieved from "https://all.docs.genesys.com/PEC-CAB/Current/Administrator/CallbackTools (2023-02-04 21:53:19)"
Category:
Comments or questions about this documentation? Contact us for support!
Download a PDF