You can limit user access within the Callback UI to what is appropriate for each user's role. This article describes the predefined Access Groups and Callback Roles to which you can assign users and includes information about how to restrict user access to callback information based on your lines of business. If you are migrating Roles and Access Groups from an earlier version of Callback, be sure to read the note related to this activity.

If you do not configure access and activity restrictions for a user, then that user has full access to everything in the Callback UI. Genesys provides predefined Callback Roles that administrators assign to users. Each Role includes permissions that control what users can see and do in the UI. For example, to perform their duties, it is sufficient for some users to view the list of callback records in the Callback UI, without the ability to modify a callback in any way. Other users might require additional permissions; for example, some users might require access permissions that allow them to create, cancel, and modify callbacks and to view errors associated with callbacks.

Review Platform administration for detailed information about which applications and documentation to use to create or modify Roles and Access Groups or to assign users to these groups.

If you have not yet moved to the Roles and Access Group settings described on this page, the original method for configuring Callback access still applies to your setup. In the original configuration, Callback access was granted when the ges or gms section in the Person object's annex included a role option (for example, Administrator).

If a user is a member of more than one Role, the Role that allows the most access to Callback features takes precedence.

In addition to Roles, a user must belong to at least one of the following Access Groups to have access to the Callback UI:

By default, Genesys defines a list of Access Groups and adds Callback Roles to some of these groups, as described below. Users who are already in these Access Groups are given Callback permissions by default. For example, any user in your Administrators Access Group is automatically granted the Callback Administrator Role. 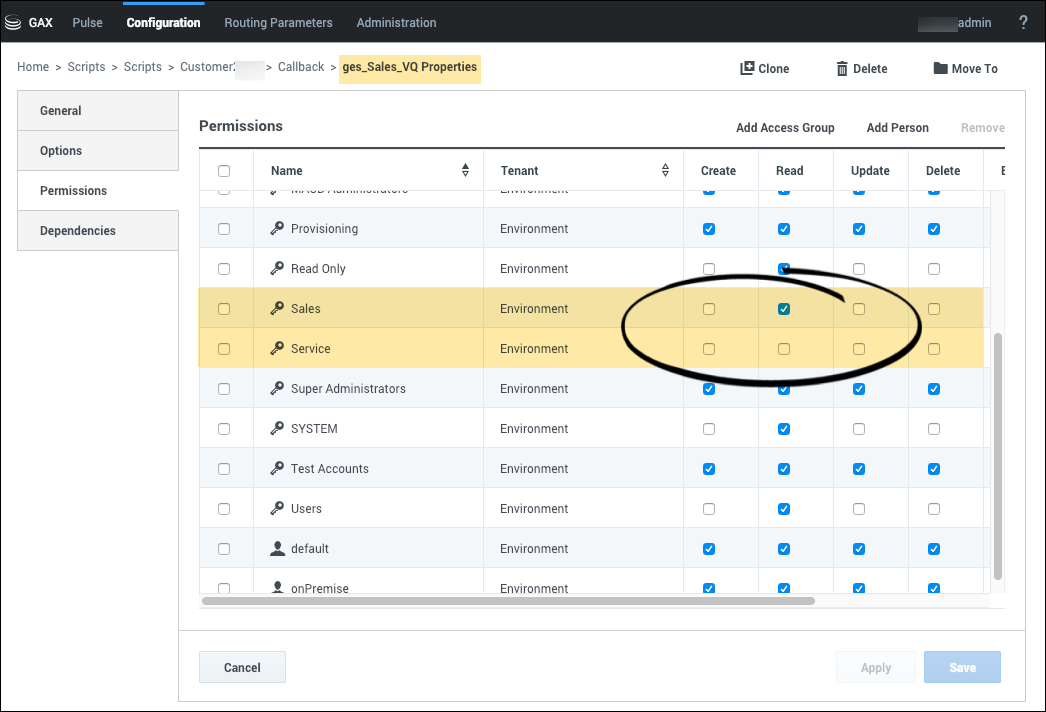 Retrieved from "https://all.docs.genesys.com/PEC-CAB/Current/Administrator/CallbackRLP (2023-01-31 12:41:17)"
Category:
Comments or questions about this documentation? Contact us for support!
Download a PDF