The Callback tab in the Callback UI displays the list of callback records. If you have sufficient user privileges, you can create, recreate, schedule, edit or cancel callbacks on this tab. Use the Advanced Options dialog to customize the display of data.

Callback Monitor is the minimum role required to access the Callback tab.

Additional tabs and dialogs might display, depending on the permissions associated with your Role.

Important
Genesys Callback supports voice calls only. Digital interactions are not supported.
Important
Callback records are stored for 14 days. The 14-day TTL setting starts at the Desired Callback Time. The Callback TTL (seconds) setting in the CALLBACK_SETTINGS data table has no effect on callback record storage duration; 14 days is a fixed value for all callback records.

Callback records can have the following states:

The Desired Callback Time is not a precise moment in time, but rather a short time increment – by default, two minutes – that begins at the time identified in the column. When a callback in the SCHEDULED state remains in that state past the Desired Callback Time time interval, a warning icon displays to alert you. Hovering your cursor over the icon displays the warning message.

A calendar icon displays beside callbacks that originated as scheduled callbacks. If there is no icon associated with a callback's state, then the callback was initiated as an Immediate callback.

If you do not see your callback after you successfully create it, make sure that your time filters are correct. For example, if you scheduled a callback to occur in two days, it does not show up if the Last 30 Days label is selected. Switch to Next 7 Days, or something similar, to view it.

Searching for a specific interaction

To quickly find a specific callback interaction, use the Tools > Callback Search menu option. To search for an interaction, enter either the callback ID or the customer's phone number and click Search. 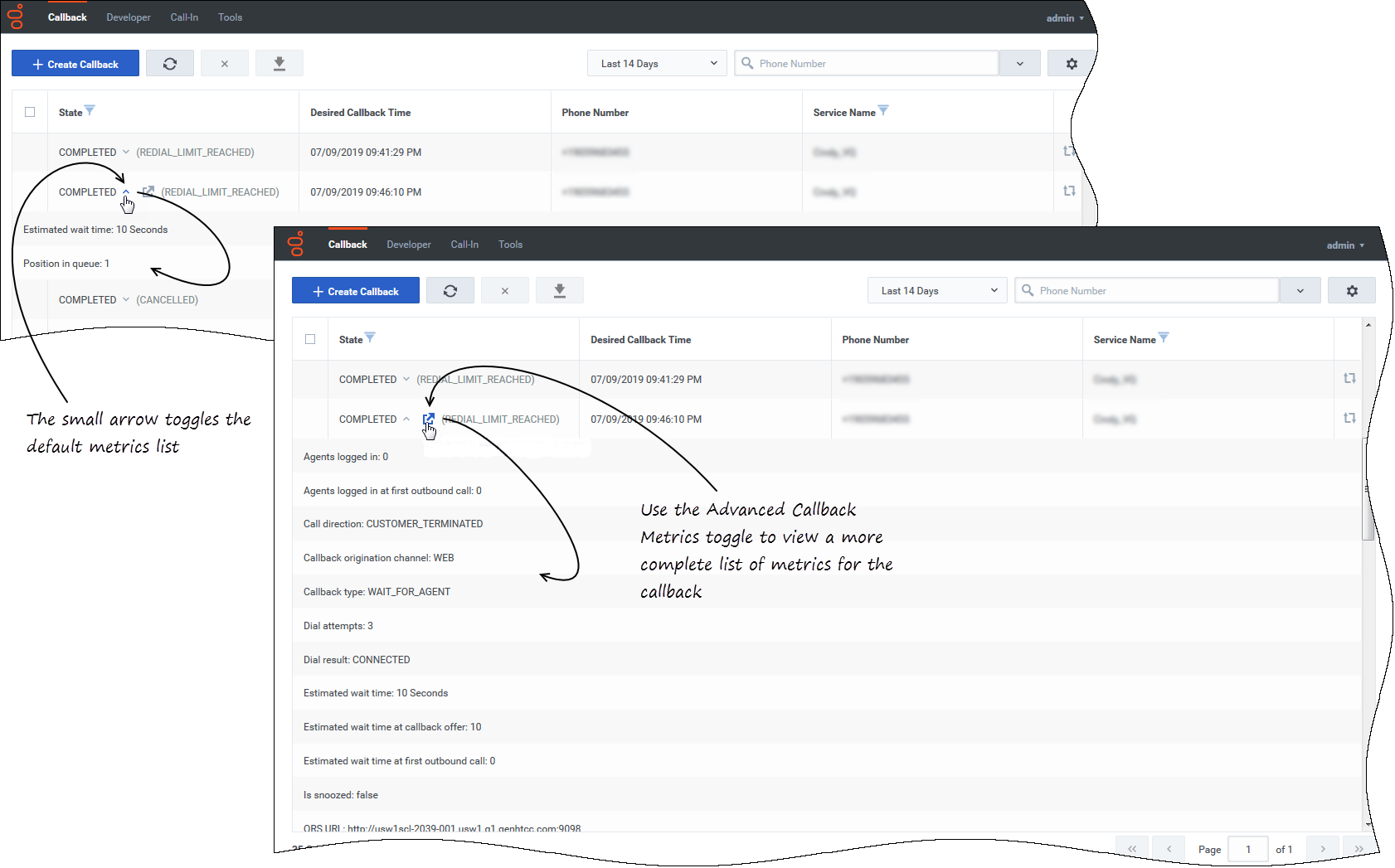 On the Callback tab, you have access to diagnostic data or metrics for each callback record. The metrics that are available for a callback depend on the callback's state. As the state of the callback progresses, more data becomes available, which means that additional metrics become available as well.

To view the metrics for a callback, click the arrow beside the record. Callback provides some basic information below the callback record (Position in Queue and Estimated Wait Time).
To view all metrics for the callback, click the Advanced Callback Metrics toggle. For example, you might want to know who cancelled a particular callback. That information is available in the list of advanced metrics.
Tip
The username of the person who created, cancelled, rescheduled, or recreated a callback is captured only when the action is performed in the Callback UI. 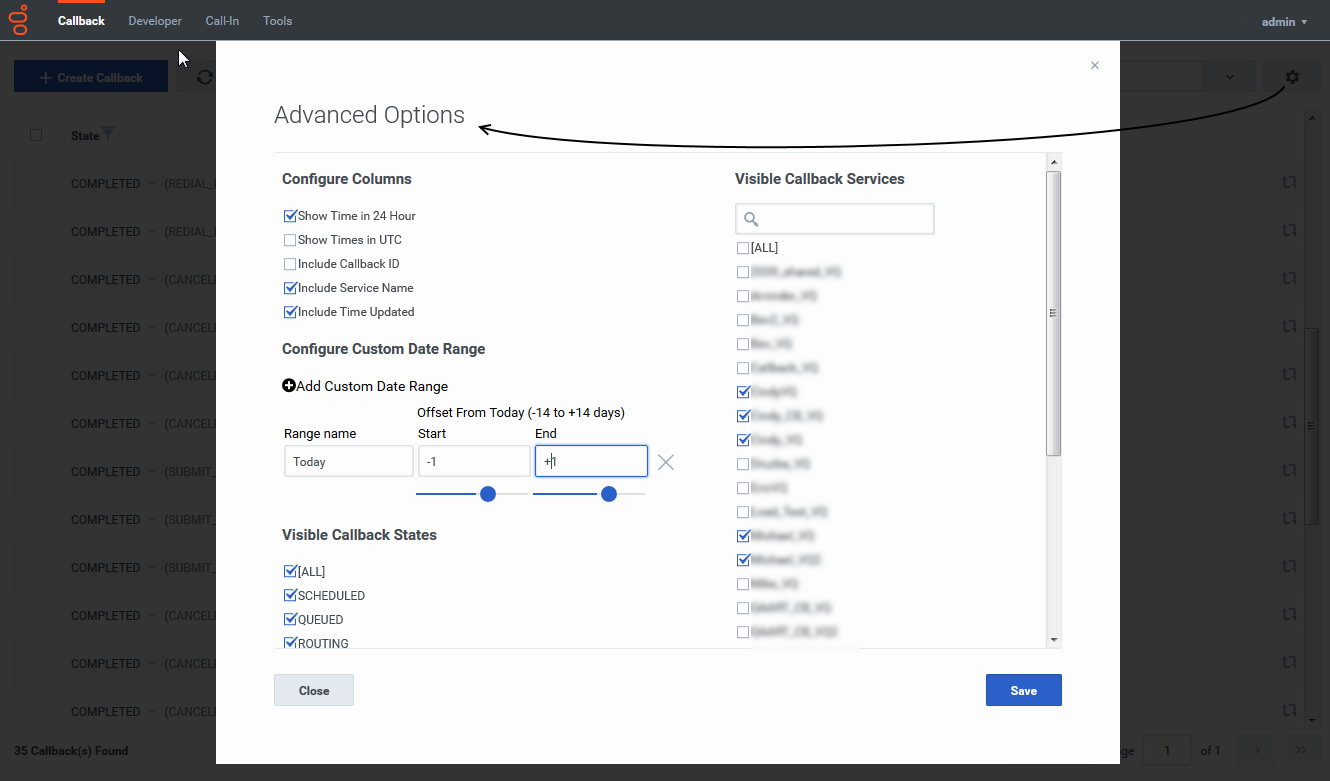 Advanced Options—Opens a dialog in which you can customize how the Callback tab displays data:

Create or schedule a callback 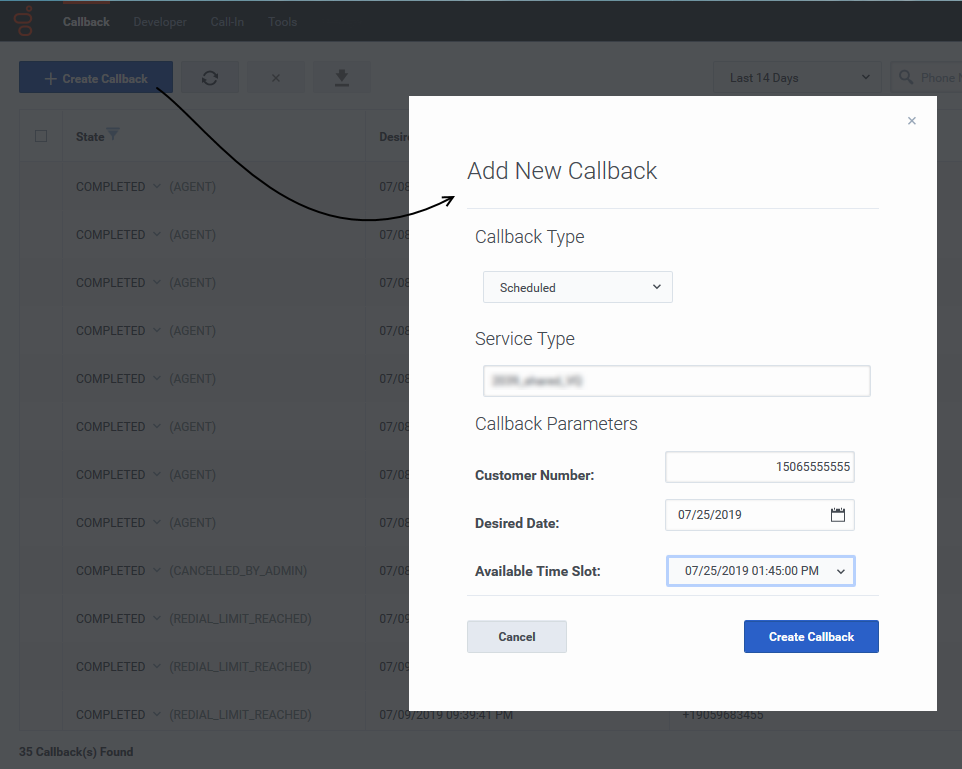 Important
This feature requires the Callback Administrator or Callback Supervisor role.
Click Create Callback to submit or schedule a callback request. A new dialog opens. Select the Callback Type (Immediate or Scheduled), then a Service Type (the name of the virtual queue provisioned in Designer), and enter the number to call in the Customer Number field. For Scheduled callbacks, select a date and time for the call.
Tip
If you provision a virtual queue for callbacks in Designer while you are logged in to the Callback UI, be aware that the new queue will not be available for use in the Callback UI until you log out and log in again because Callback fetches virtual queue permissions data only at login. In other words, Callback determines which virtual queues you have access to when you are logging in, and only then. 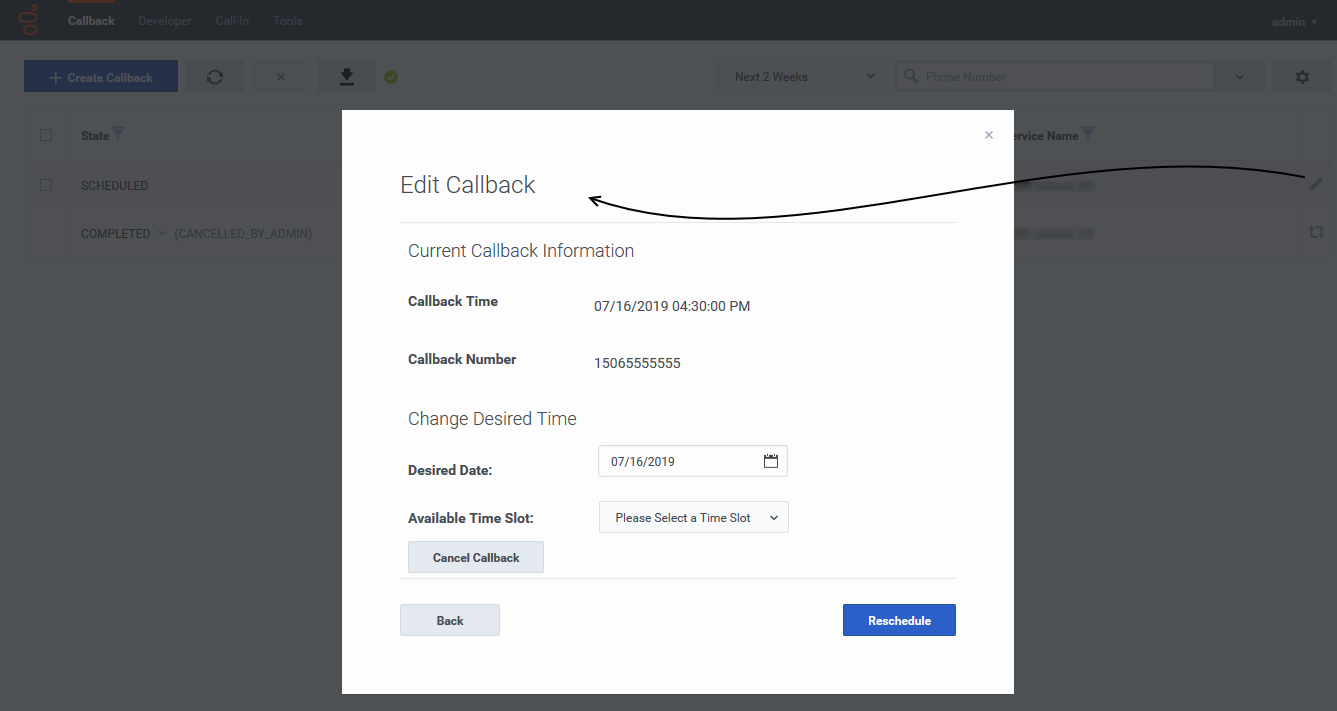 Important
This feature requires the Callback Administrator or Callback Supervisor role.
For completed callbacks which can be recreated, the

icon displays in the last column of the table. Click the icon to open the Recreate Callback dialog for that callback.
Important
Name recordings will be preserved if a callback is rescheduled within four days of the completion of the original callback. 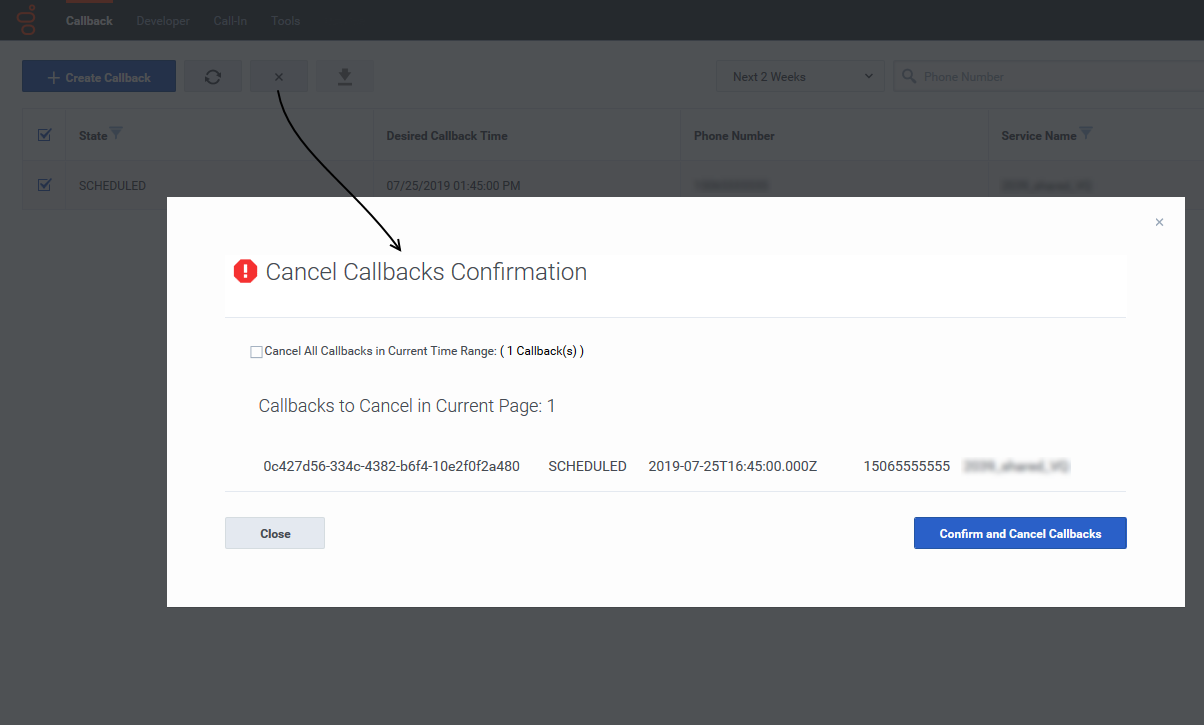 Important
This feature requires the Callback Administrator or Callback Supervisor role.
Make sure to select an appropriate Time Range to filter callbacks, then make a callback selection to activate the Cancel Callbacks button. When you click this button, the Cancel Callbacks Confirmation dialog opens, displaying the selected callback cancellations.

The resulting display shows all the callbacks that you have cancelled and that are now in the COMPLETED (CANCELLED_BY_ADMIN) state.

The Export Cancelled Reports dialog provides the Cancellation Summary Report file only when you have recently cancelled some callbacks. This report shows the cancellation status of the recently-cancelled callbacks.
Retrieved from "https://all.docs.genesys.com/PEC-CAB/Current/Administrator/ManagingCallbacks (2023-02-08 23:52:47)"
Category:
Comments or questions about this documentation? Contact us for support!
Download a PDF