You want to manage the number of scheduled callbacks that are allowed during specific time intervals. To do that, you'll create a Capacity rule in Genesys Callback and assign it to a callback queue. We'll walk you through the process and explain the implications of using a Capacity rule in relation to Designer. We'll also tell you about a shortcut method for entering values in your Capacity rule (JSON-format capacity statements).

Related documentation:
Callback capacity refers to the maximum number of scheduled callbacks that are allowed in a given time interval.
Important
To create or edit Capacity rules, you must be a member of the Callback Administrator role. The Callback Developer, Callback Supervisor, and Callback Monitor roles have read-only access. Access to queues is subject to line-of-business filtering where role-based access control is enabled. 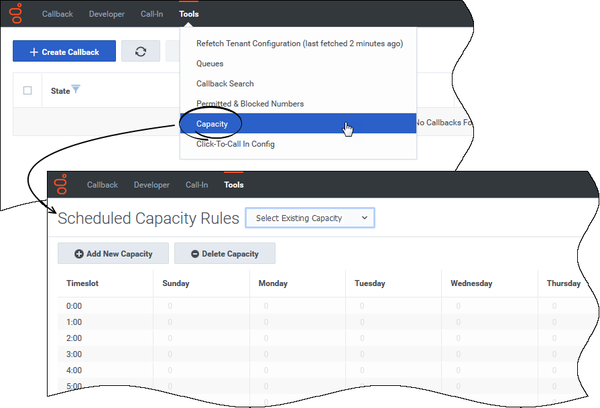 There is no time zone associated with a Capacity rule. During the evaluation process to determine if a scheduled callback can be booked or not, the time zone associated with the business hours service is used. Be sure you have the business hours, including the time zone, configured (in Designer) for the queue before you apply any Capacity rules. For more information about configuring business hours, see [[PEC-ROU/Current/Designer/DesBusinessHours|]] and [[PEC-ROU/Current/Designer/BusinessHrs|]] in the Designer documentation.

A Capacity rule that you configure in the Callback UI and assign to a queue has an effect on the Slot Capacity and Slot Duration settings in Designer's CALLBACK_SETTINGS data table.

A value that you specify for a time slot on the Capacity page in Callback is the maximum number of scheduled callbacks that you can support for each Slot Duration (configured in Designer) within that time interval. For example, if you configure a Capacity rule for 9:00 to 10:00 a.m. on Monday morning with a value of 5 and you assign that rule to a queue for which the Slot Duration in Designer is 15 minutes, then what the rule allows is a maximum of 5 scheduled callbacks every 15 minutes between 9:00 and 10:00 a.m. on Monday morning.

A Capacity rule assigned to a queue overrides the Slot Capacity setting in the Designer CALLBACK_SETTINGS data table for that queue. For example, if you configure a rule for 3:00 to 4:00 p.m. on Wednesday afternoon with a value of 5 and you assign that rule to a queue for which the Slot Capacity in Designer is set to 3, then the rule allows a maximum of 5 scheduled callbacks for each Slot Duration during that hour on Wednesday afternoon, overriding the value of 3 that was set in the CALLBACK_SETTINGS table.

Before you create Capacity rules and assign them to queues, make sure that you have provisioned Callback in Designer. In particular, make sure that the following configuration is complete:

Using a rule to adjust capacity

Let's assume that we have a special campaign running in the month of March because we are launching a new product feature. We anticipate higher than normal call volumes, so we plan to increase the number of skilled agents to support customer inquiries. We also anticipate more callback requests, so we plan to adjust the capacity for scheduled callbacks during the entire month of the launch.

In the CALLBACK_SETTINGS data table in Designer, let's say that we have set the capacity for scheduled callbacks to 5 and specified a slot duration of 15 minutes for the callback application. In other words, on a normal day we can handle 5 scheduled callbacks every 15 minutes during open office hours. In Designer, we set this "flat rate" for capacity, but, for the month of March, we want to make some adjustments to that. We make the adjustments using a Capacity rule that we'll configure and assign to queues in Callback. 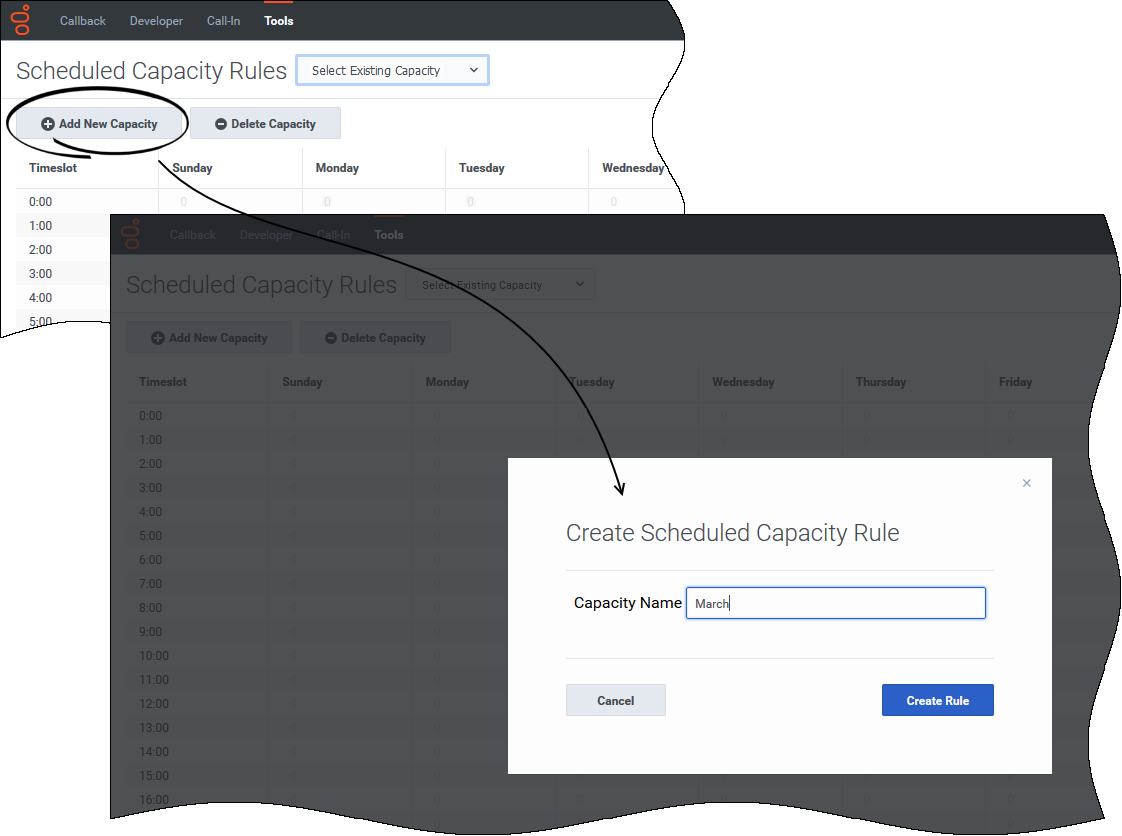 To create a Capacity rule, you must first give it a name. You cannot edit the name of a rule after you click Create Rule, so be sure that you have entered the name exactly as you intended. We'll call this new rule March because we are making adjustments to the capacity for that month. The rule can be applied to all relevant queues for the month of March to override the setting in Designer.

Select the Timeslot Length. This value sets the time slot duration on the capacity calendar, it does not change the Slot Duration that you set in Designer. This setting governs all time slots on the calendar; you cannot have some half hour-long slots and some hour-long slots.

For this example, we will set the timeslot length to Hour. 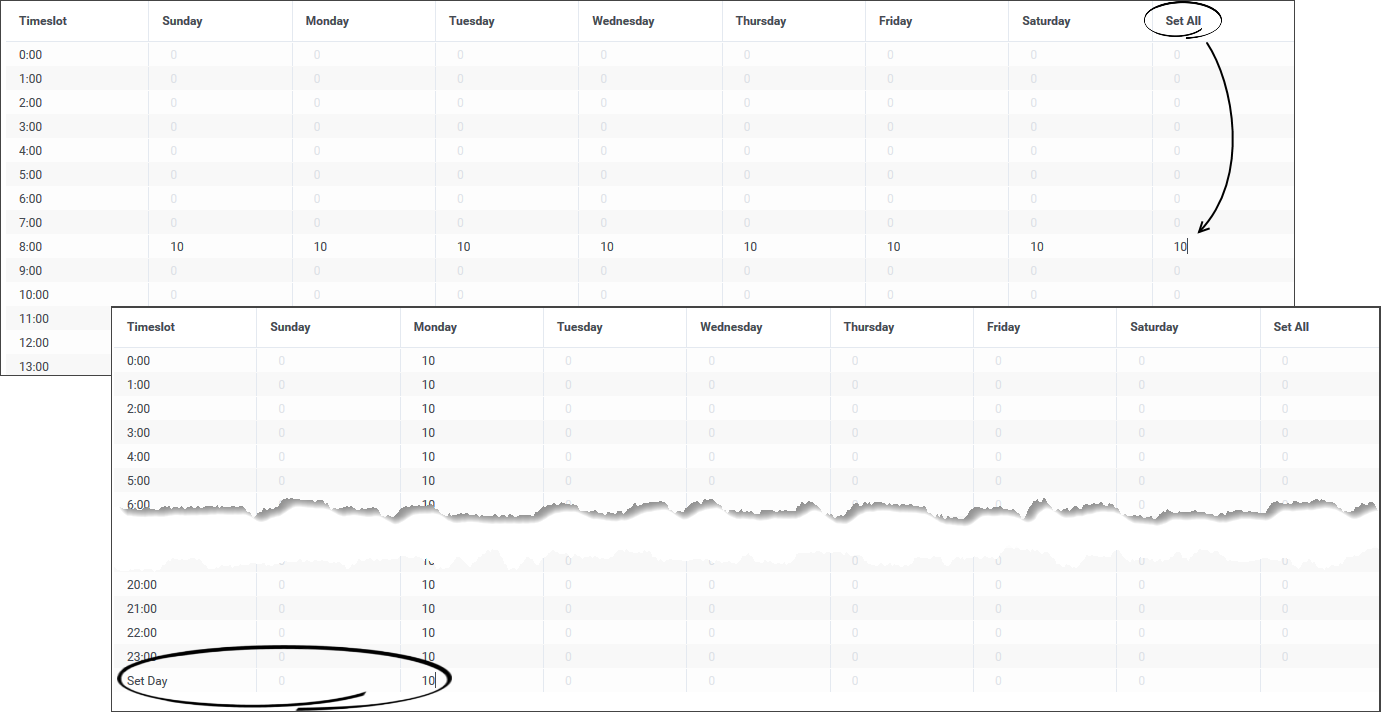 When creating a Capacity rule, if you do not enter a value for a particular time slot, then the system reads that time slot as having 0 or no capacity when determining if a scheduled callback can be booked.

Currently, Callback does not support the definition of exceptions for specific dates; for example, statutory holidays. 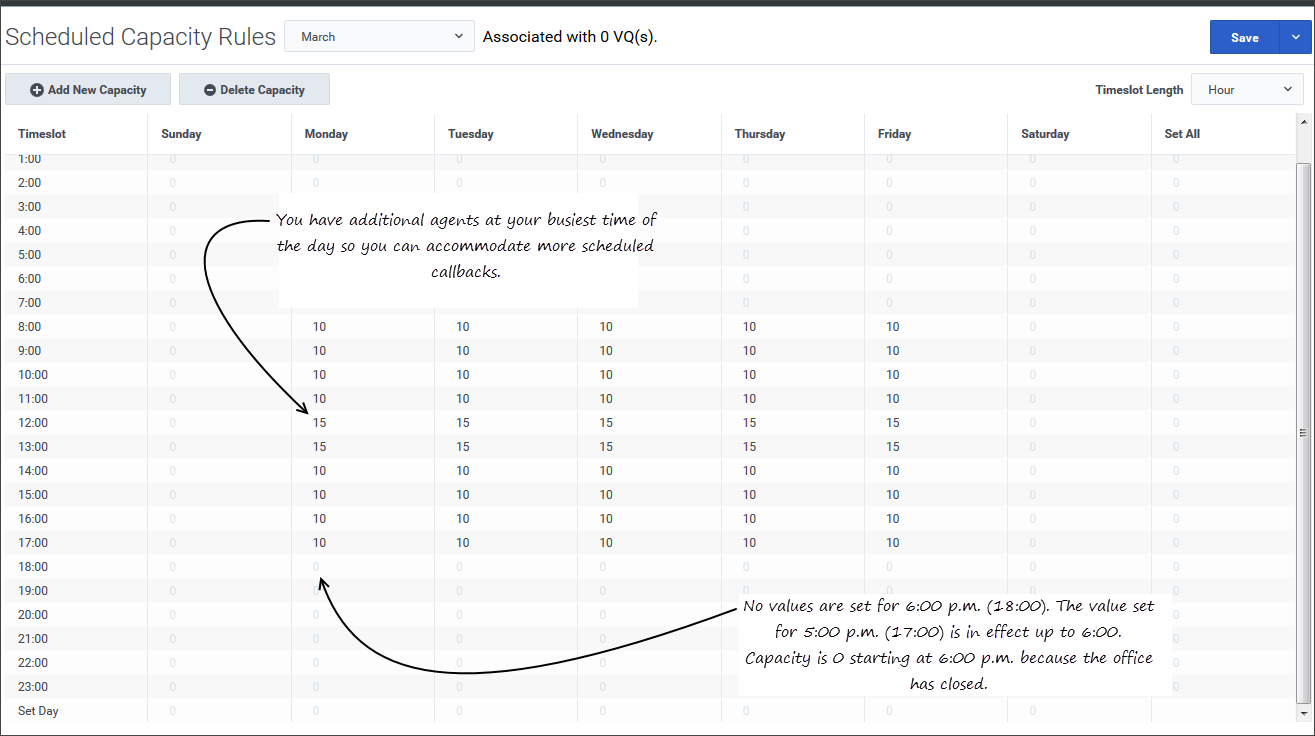 Returning to our sample Capacity rule (March), we will set values for the days and hours that we're open (8:00 a.m. to 6:00 p.m., Monday to Friday) based on the additional agents that we have during the month of March. Slot duration in the CALLBACK_SETTINGS table is, as previously mentioned, set to 15 minutes. This means that we will be overriding the 5 scheduled callbacks that we normally have capacity to handle every 15 minutes with the following capacity values:

Once this Capacity rule is assigned to the callback virtual queue, the capacity specified in the rule takes effect.

After you have set some or all of the values, remember to save the rule. You can edit the values at any time. Saved changes to rules will be applied immediately to any queue to which the rule is assigned.

If you edit values in the calendar after it has been saved and you discover that you have made some mistakes or you decide against the changes that you've made, then click Revert to return to the last-saved values.

Assigning a Capacity rule to a queue

A rule is created based on one week (Sunday to Saturday), but the capacity specified in the rule for each time slot of every day remains in effect on a queue for as long as the rule is assigned to that queue. After you have configured at least one rule, you can assign the rule or rules to your queues. You can assign a rule to multiple queues, but you can assign only one rule to each queue.

To assign a rule to a queue, navigate to the Tools > Queues page in your Callback UI. Locate a queue to which you want to assign a rule. You might need to filter the list of queues to locate what you're looking for. Once you find the queue, open the drop-down menu in the Capacity Rule column. Select the rule that you want to assign to the queue. Continuing our example, we will assign the March Capacity rule to the callback virtual queue. The rule takes effect immediately on that queue.

Tip
You can select a rule on the Scheduled Capacity Rules page to see how many queues the rule is assigned to. This is important if you want to delete a rule. As long as it is assigned to at least one queue, you won't be able to delete it. 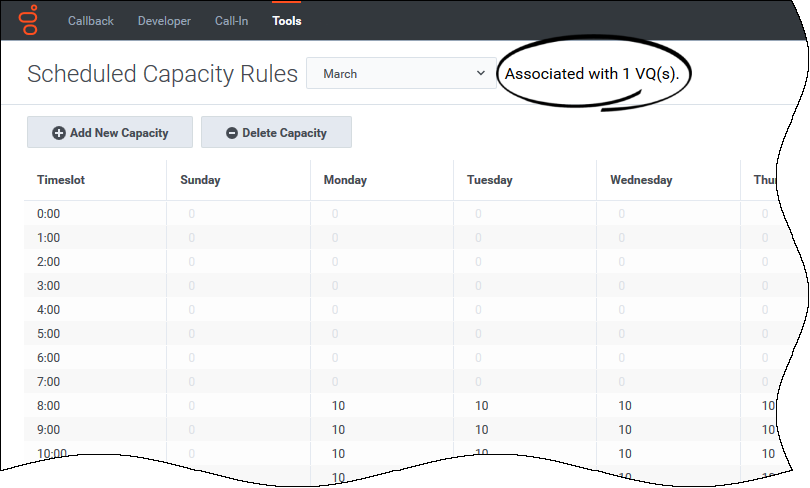 Once March is over and we want to return to our normal level of scheduled callbacks, we simply remove the assignment of the March rule from the queue.

You can create a Capacity rule and manually enter your capacity for various hours and days or you can define your capacity in JSON format and then copy and paste the JSON capacity statement directly into an open and focused Capacity rule using your usual pasting shortcut; for example, Command/Ctrl+V or the contextual menu. Make sure that no cells are selected in the capacity calendar. If a cell is selected, then the capacity data will be pasted into only the selected cell.

The following sample shows the correct format to use for JSON capacity statements:

How capacity is evaluated for a short time interval

As mentioned earlier on this page, the Callback Capacity rules affect the Slot Duration and Slot Capacity settings that are configured in Designer. Because the Capacity rules are based on callback capacity for time slots that begin at either the top of the hour or the bottom of the hour, there are situations in which a time slot might be ignored (no callbacks will be scheduled in that slot). For example, if your office hours begin at 7:50 a.m., Slot Duration (minutes) is set to 15 minutes in Designer, and a Capacity rule assigned to the callback queue specifies a capacity of 10 scheduled callbacks between 7:30 and 8:30 a.m., then the system will begin scheduling callbacks for 8:00 a.m. There can be up to 10 scheduled callbacks between 8:00 and 8:15, and another 10 between 8:15 and 8:30. The system will not schedule callbacks between 7:30 and 7:45 because the business is not open during that slot, and the slot 7:45 to 8:00 is also considered to be unavailable because the business is still closed at 7:45. In other words, Callback checks the conditions only at the start of a Slot Duration period.

Switching the timeslot length in a saved Capacity rule

If a Capacity rule was initially configured with half-hourly time slots in Callback, and you later decide that you want to change it to hourly time slots, then you can certainly do so. The capacity values that were originally configured for the bottom of each hour are "dropped" and the capacity values that were set at the top of each hour are used instead.

Half-hourly converted to hourly: When you convert a half-hourly Capacity rule to hourly, then the value that was set at the top of the hour is duplicated at the half hour.

Hourly converted to half-hourly: When you convert an hourly Capacity rule to half-hourly, then the value that was set at the top of the hour is duplicated at the half hour.

Retrieved from "https://all.docs.genesys.com/PEC-CAB/Current/Administrator/CallbackCapacity (2023-02-06 13:12:20)"
Category:
Comments or questions about this documentation? Contact us for support!
Download a PDF