Before you provision Callback in Designer, make sure that the following objects are created in Platform Administration and ready for use:

Genesys recommends that you use the following naming conventions for the queues:

Having all three callback-related virtual queues provides the following functionality:

The following Callback provisioning workflow assumes that you have already completed the configuration described in the Before you start section, above.

The following table provides information about the types of Designer applications that you require for each supported callback scenario. Create the Designer applications after you have created the Inbound, Callback, and Outbound virtual queues and before you provision the Callback services.

Provision a Designer application to offer callback through the IVR

In Designer, add a new application. The application type must be Default. This application is used to offer callback through the IVR.

Important
If redirecting a caller to a Designer application that contains IVR callback, only 1-step transfers are supported. 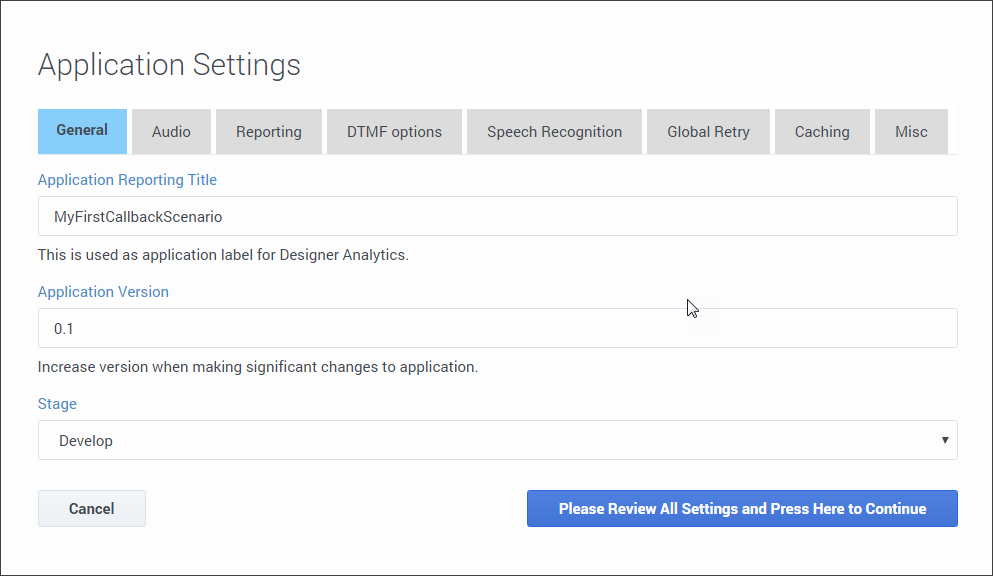 There are no mandatory settings changes for the Default application, however, if there are any specific settings that you typically use for Designer applications, consider if those settings are required for your Callback Default-type application and make any necessary updates. 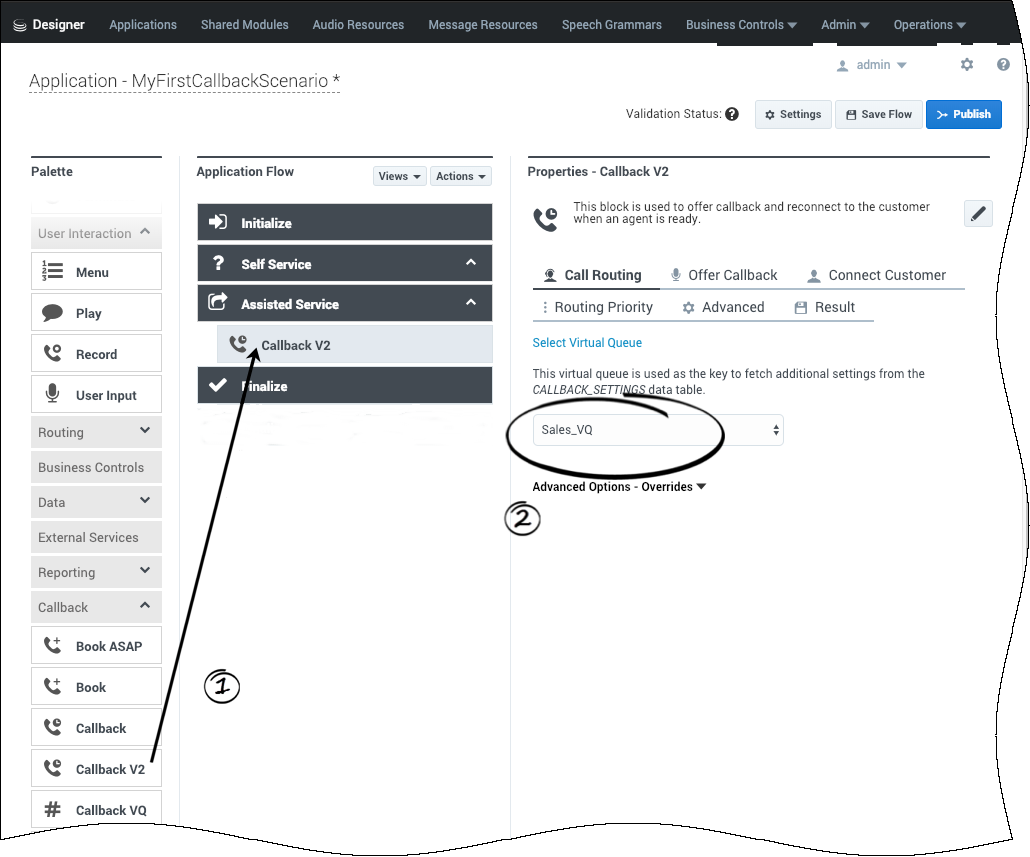 In Designer, select your Default-type application.

Scroll the Palette list to reach the Callback items. Drag and drop a Callback V2 block into the Assisted Service phase of your application.

In the properties panel, under Call Routing, select the Inbound virtual queue that you configured for Callback.

For additional information about the Callback V2 block properties, see the Designer documentation.

When you complete configuration of the application, you must save and publish it. Remember to assign a phone number to it.

This application type is used for setting up outbound callbacks (voice calls only). Digital interactions are not supported.

Important
You must create the Callback-type Designer application before you can edit the CALLBACK_SETTINGS data table. 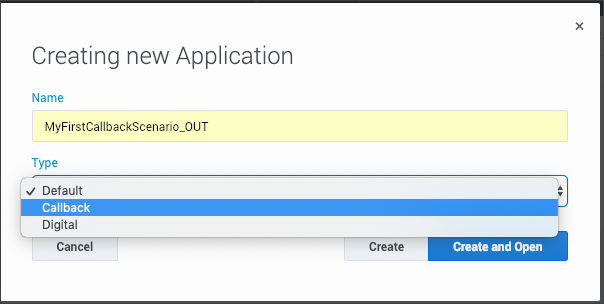 In Designer, add a new application. The application type must be Callback. This application is used to re-connect with customers who requested a callback.

There are no mandatory settings changes for the Callback-type application, however, if there are any specific settings that you typically use for Designer applications, consider if those settings are required for your Callback application and make any necessary updates. 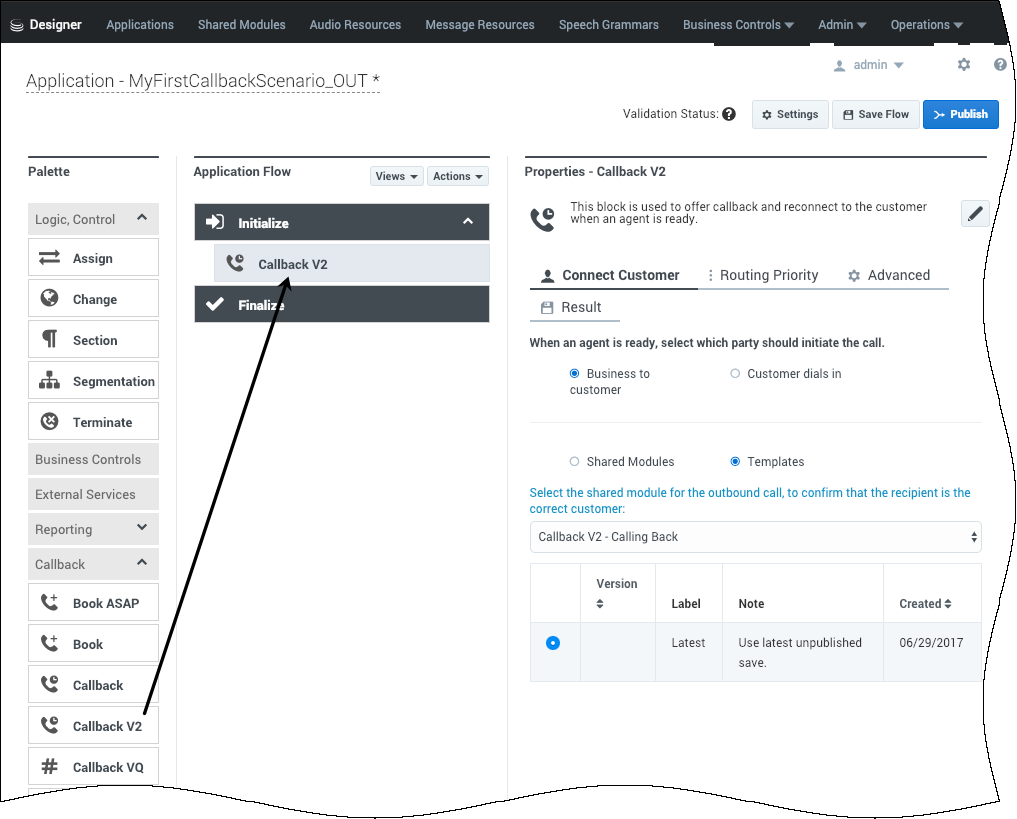 In Designer, select your Callback-type application.

Scroll the Palette list to reach the Callback items. Then drag and drop a Callback V2 item into the Initialize section of your application. For information about the Callback V2 block properties, see the Designer documentation.

Important
In the Callback V2 properties panel, under Connect Customer, only the Business to customer option is currently supported.

When you complete configuration of the application, you must save and publish it. You click Publish to make your application available for use. For information about publishing a Designer application, see Saving and Publishing Your Application.

For information about configuring your business hours in Designer, see Business Hours in the Designer documentation.

You must make sure that the following prerequisites are completed before you add your queue to the CALLBACK_SETTINGS table:

Adding a Callback virtual queue to the CALLBACK_SETTINGS data table

In Designer, navigate to Business Controls > Data Tables. Click CALLBACK_SETTINGS and add an entry for your Callback Inbound queue as described in the Callback Settings Data Table documentation. 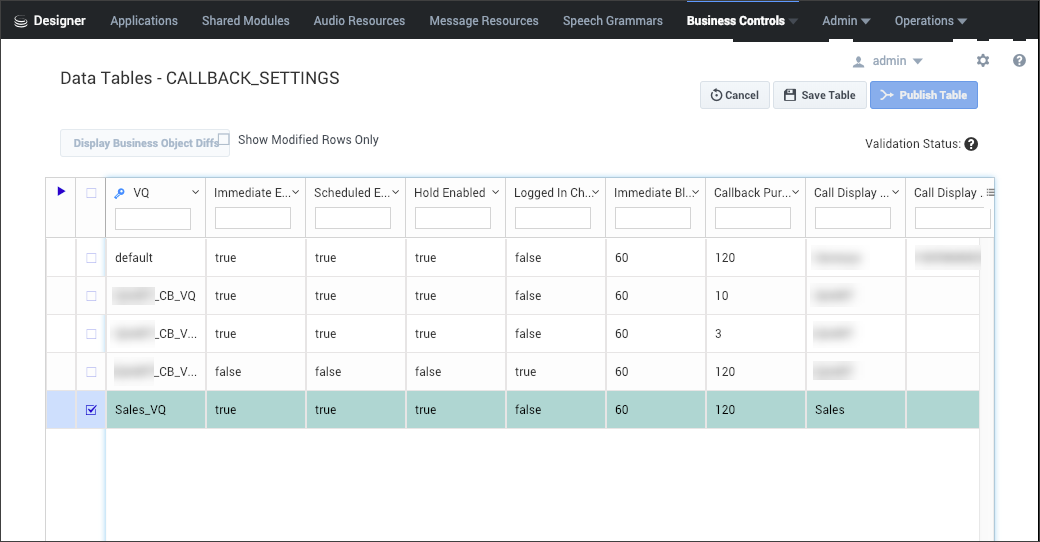 The default VQ row in the CALLBACK_SETTINGS table must include a valid Designer Callback-type application, a valid Business Hours object, and a semantically-correct skill expression.

In the row in which you are configuring the Inbound virtual queue, select your Designer Callback-type application in the Callback Application column of the table. In the figure, this is the Sales_VQ row of the table.

If you defined Callback skills for Callback agents, you can use this as a condition for the Inbound virtual queue.

To test Scheduled callback, call the phone number that is assigned to the Default-type application and choose Scheduled Callback. Listen carefully to the prompt. If it is using default settings, then it will ask you to specify a day and time for the callback based on the Pacific time zone. Also pay close attention to the actual date and time that you booked before accepting, especially if you have entered a time intended to be on the current day; the system might have offered you a time slot that is a week later. The outbound call experience is identical to the in-queue callback scenario.

Retrieved from "https://all.docs.genesys.com/PEC-CAB/Current/Administrator/ProvisionCallback (2023-02-09 04:00:11)"
Category:
Comments or questions about this documentation? Contact us for support!
Download a PDF