As a Callback administrator, you want the added security of blocking callbacks to certain numbers and countries. To do that, you'll configure a Country and Number Validation rule in Genesys Callback and assign it to at least one callback queue. You can test your rules before assigning them to a queue or when troubleshooting. You can also edit and delete existing rules, as required.

Related documentation:
Important
To create, edit, or delete country and number validation rules, you must be a member of the Callback Administrator, Callback Developer, or Callback Supervisor role.

To avoid initiating callbacks to certain countries or to numbers that you know to be fraudulent, you can configure country and number validation rules on the Tools > Permitted & Blocked Numbers page, and then assign those rules to queues on the Callback Queues page. You can create a rule to specify the list of countries to which you permit callbacks for specific queues. You can also optionally enhance a rule by defining simple or complex (regular expression) numeric patterns that will block callback attempts to matching numbers.

Once a rule is configured, you can assign it to as many queues as necessary. It is important to note, though, that you can assign only one rule to each queue. Before creating a rule, consider to which queue or queues you will assign it and make sure that the rule incorporates the countries to which you permit callbacks for that queue as well as any numeric patterns in any of those countries that you want to block. Rules are checked before the system initiates a callback. 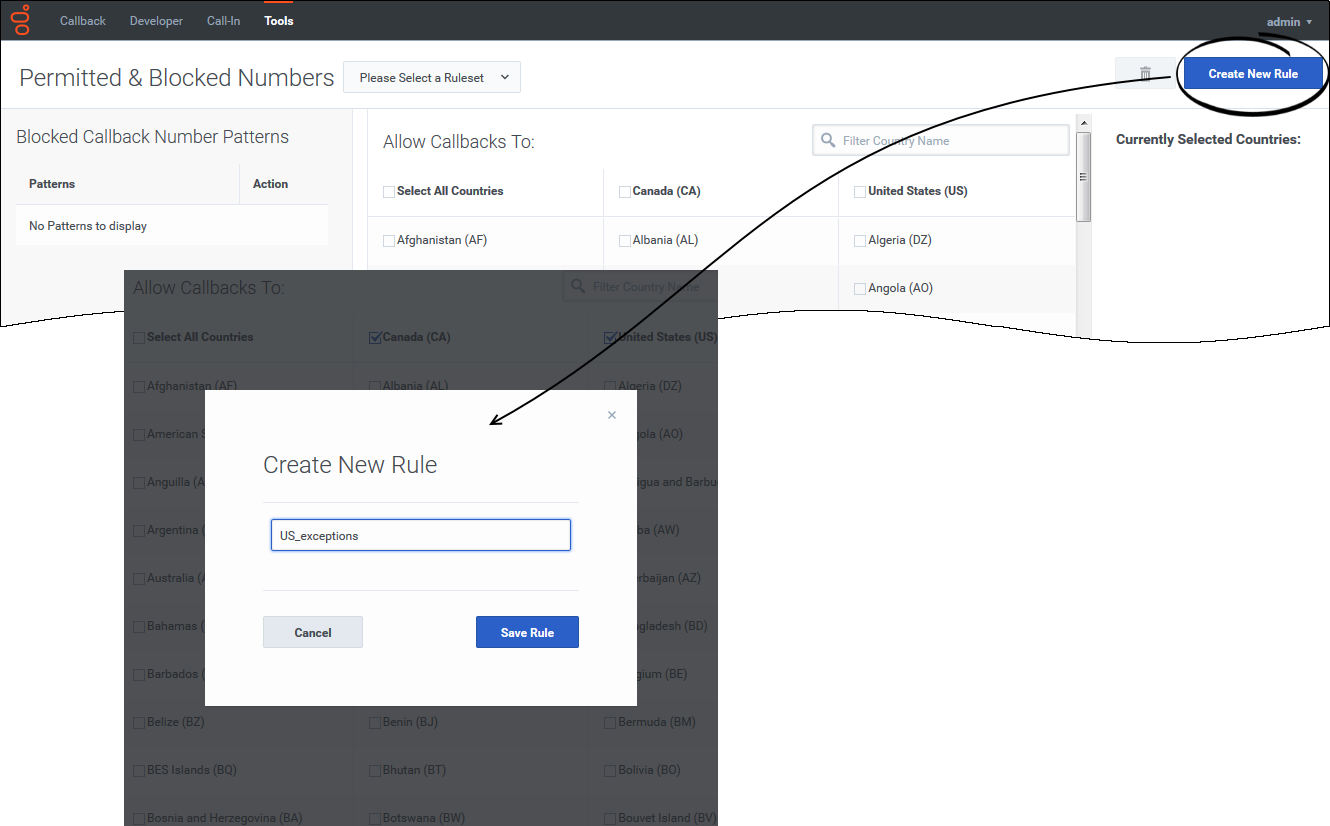 The first step in creating a new country and number validation rule is to give the rule a name. Later, you will need to pick the rule from a list when you assign it to a queue, so make sure the name is descriptive enough for you to understand what it allows and denies. 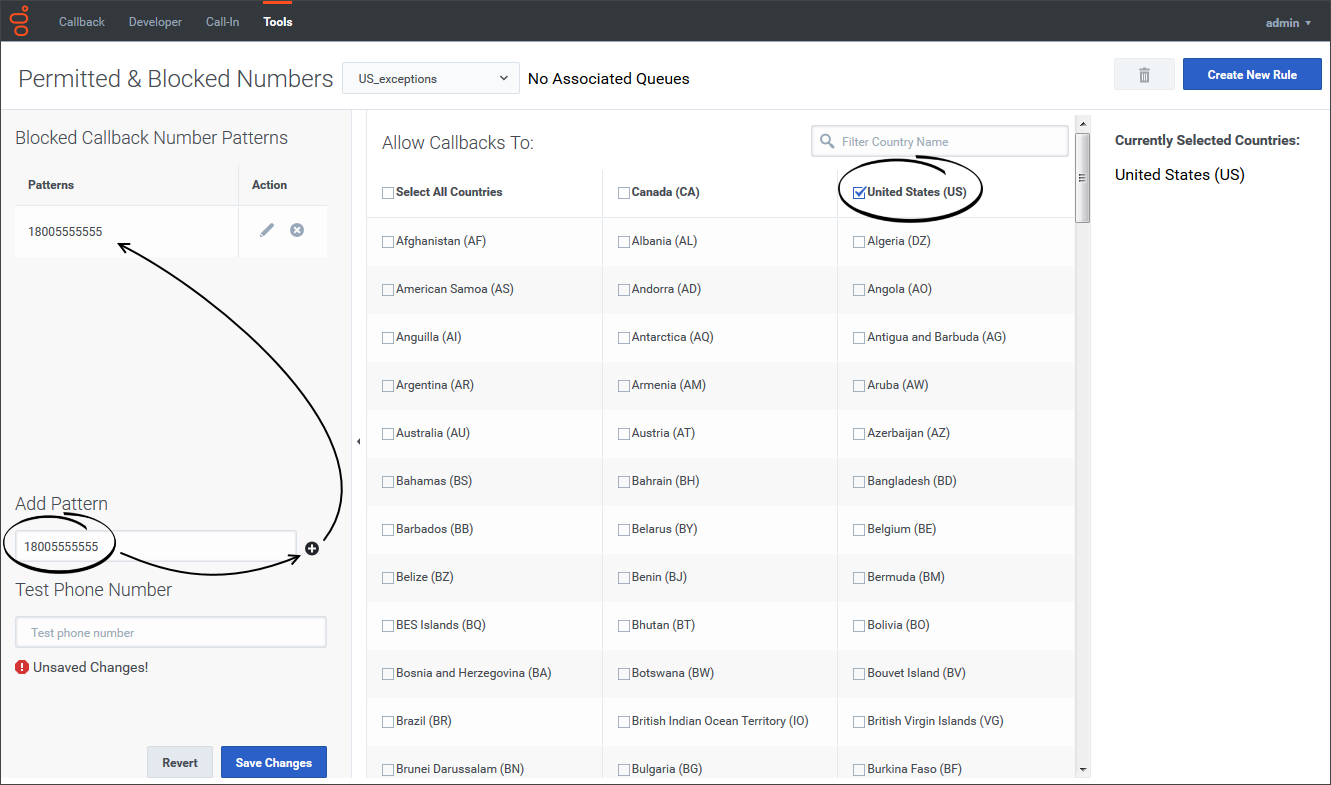 When creating a rule, you must select at least one country on the Permitted & Blocked Numbers page. You can enter blocked number patterns only after you make country selections. Adding a country to the rule means that you allow callbacks to that country. For countries that are not added to a rule, no callback attempt will be initiated on the queue or queues to which the rule is applied.

After you have selected the countries to which you allow callbacks, enter any patterns that you want to block. Patterns must be entered as regular expressions. For example, if you have a list of suspicious phone numbers for the selected countries and you do not want the system to make callback attempts to those numbers, then add those to the rule.

The figures on this page show the addition of specific numbers, but you could enter ^1234[0-9]+, which would match any phone number that starts with 1234. While a rule must contain at least one country, the addition of blocked number patterns is optional.

To add a blocked number pattern, simply enter it in the field and click "plus" (

). You must enter patterns individually; that is, enter a pattern and add it to the rule before entering another pattern. 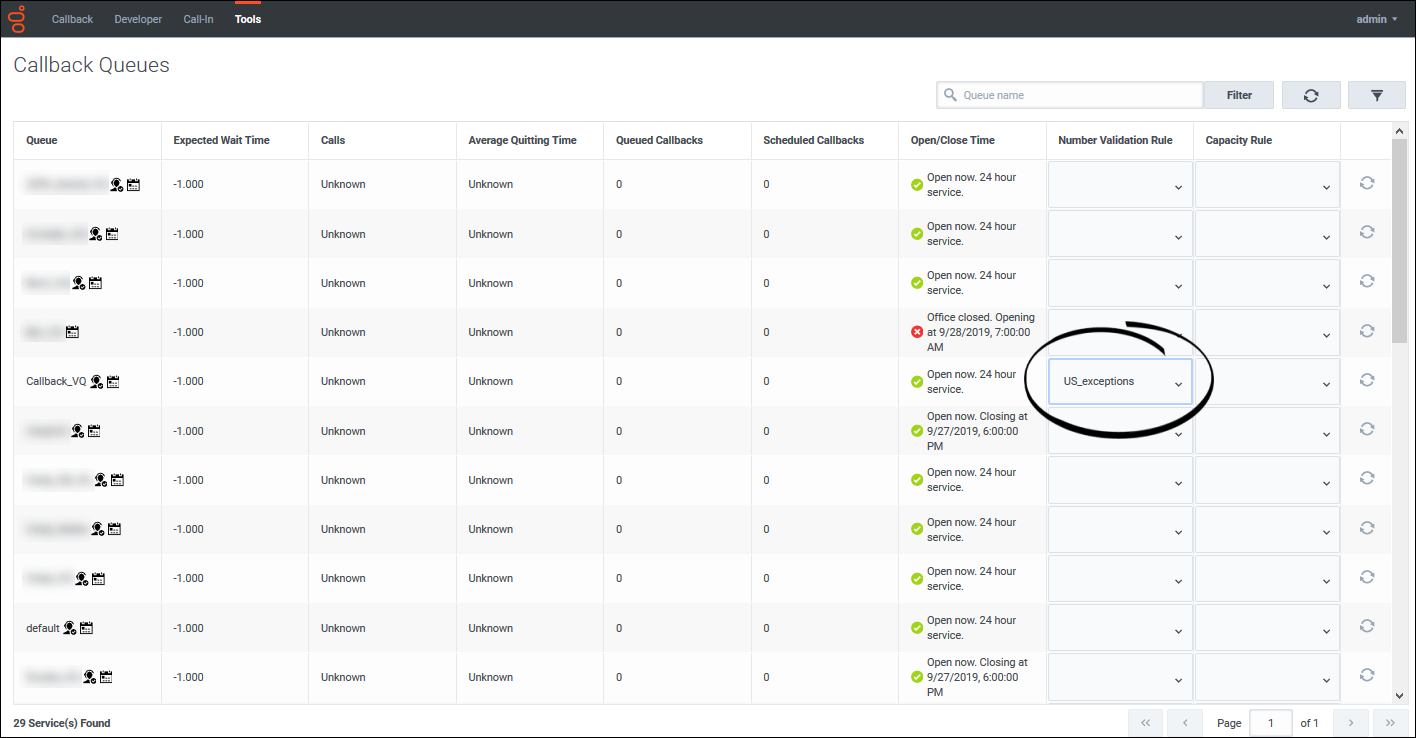 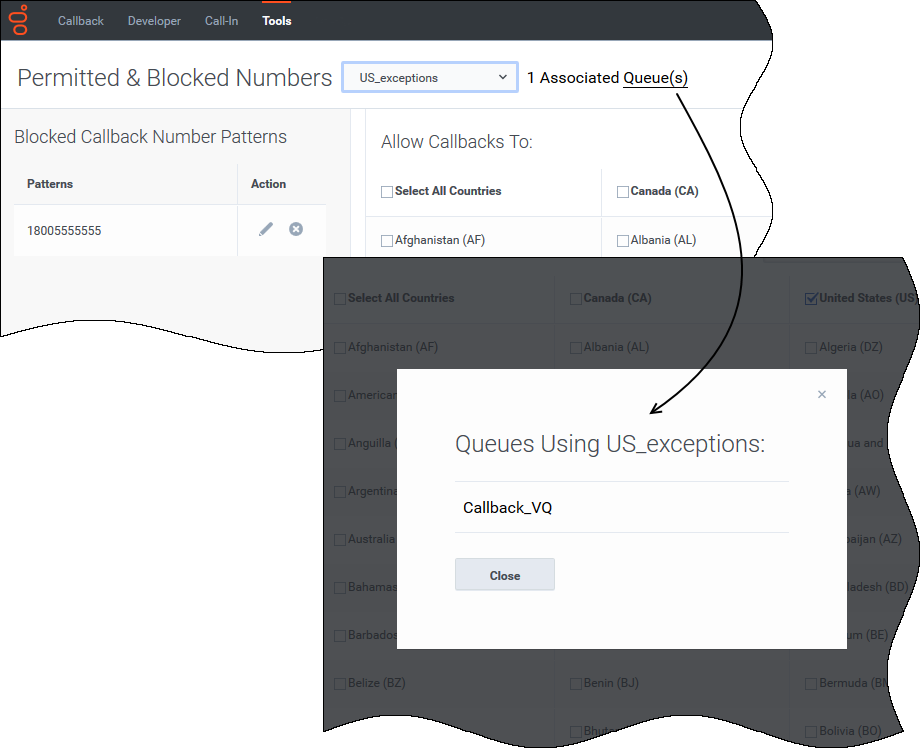 For your reference, each rule displays the list of queues to which the rule is assigned (or indicates that the rule is not yet assigned) so you will know which queues, if any, you are impacting when you edit a rule.

Changes that you make to a rule's definition are applied to any queue to which the rule is assigned as soon as you click Save Changes. If, while editing a rule, you decide that you want to discard your changes – perhaps you have made some mistakes or you discover that you are editing the wrong rule – click Revert to return the rule to its last-saved configuration. 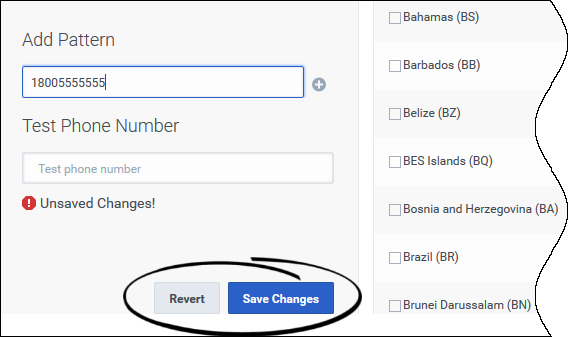 To help you manage impacts to queue activity, the Callback UI does not allow you to delete a rule that is assigned to a queue. Use the list of queues associated with the rule to help you determine if the rule can be safely removed from each assignment.

Navigate to the Callback Queues page in the Callback UI to remove a rule from a queue. Once the rule is removed from all queue assignments, you can delete it. 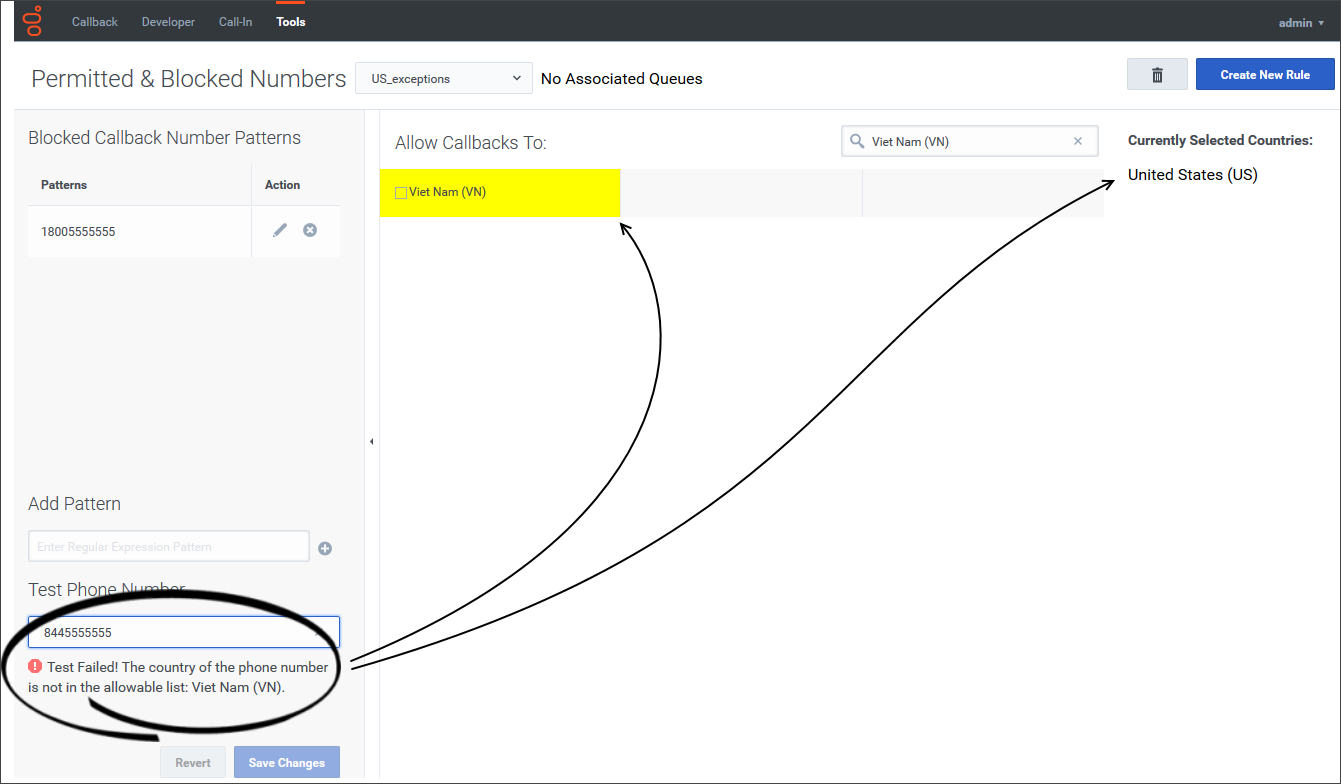 After you have created and saved a rule, you can use the rule to validate any number quickly using the testing feature on the Permitted & Blocked Numbers page. For example, you might be troubleshooting an error and you want to see if a rule might be interfering with the callback.

Enter a number in the Test Phone Number field. The number fails the rule's validation test if the number belongs to a country that is not added to that rule or if the number matches any one of the defined blocked number patterns.

If the number fails the check against allowable countries, then the system returns this reason for failure and does not validate the number against the blocked number patterns, even though the number might also fail that test. 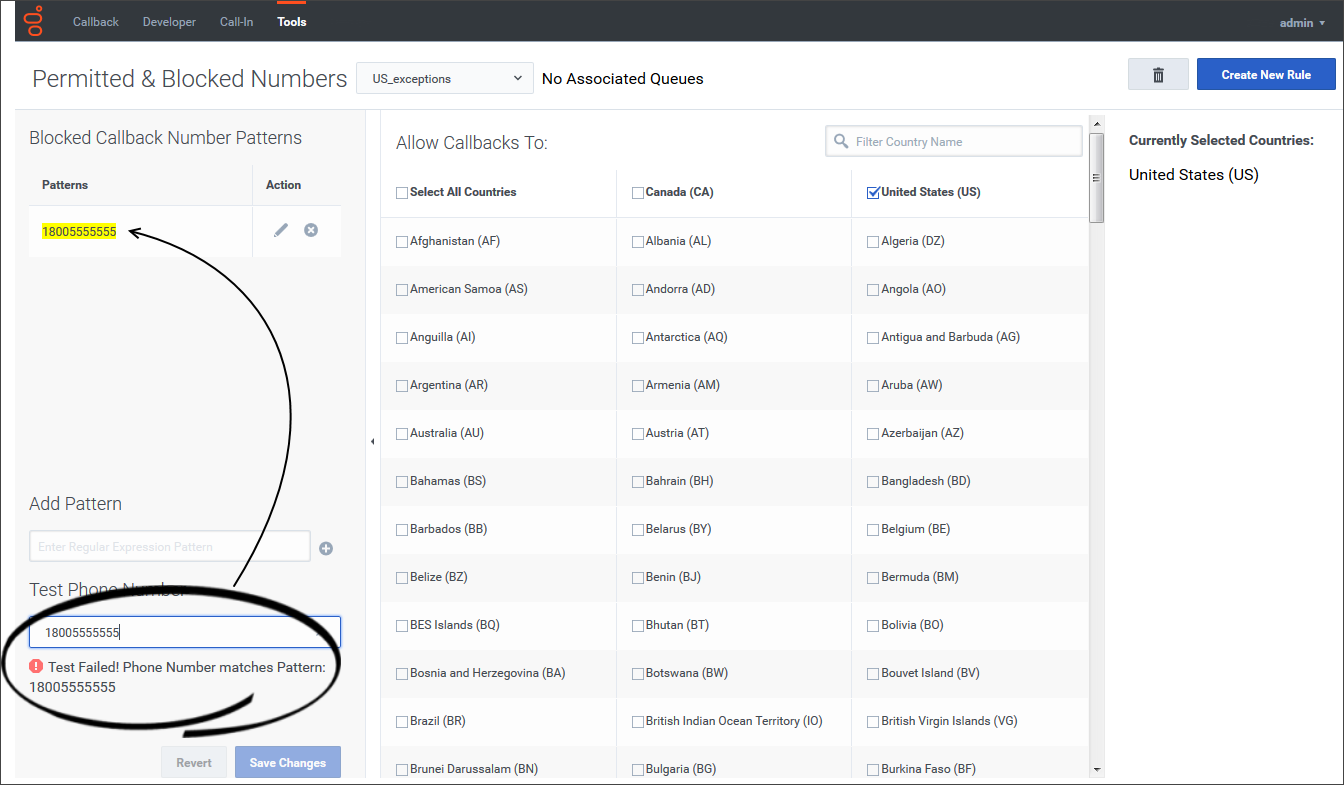 If a number passes the country validation test, then it is checked against the blocked number patterns. 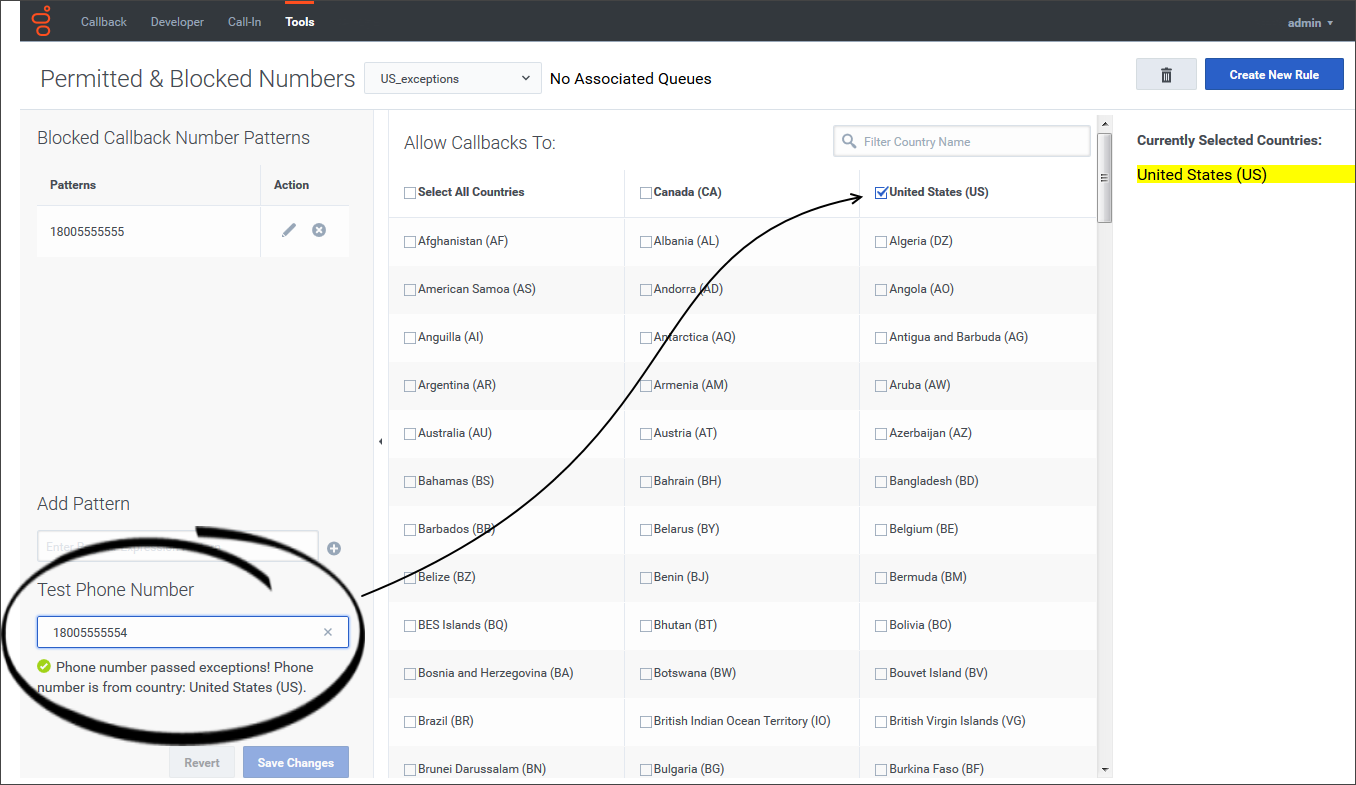 If the number belongs to a country to which callbacks are allowed for that rule and the number is not listed within the blocked number patterns, then the system validates that the number is acceptable for callback attempts.
Retrieved from "https://all.docs.genesys.com/PEC-CAB/Current/Administrator/CallbackPatterns (2023-02-06 13:02:12)"
Category:
Comments or questions about this documentation? Contact us for support!
Download a PDF