Learn about Predictive Routing interaction flows, how the URS Strategy Subroutines work together to score agents and identify a routing target, how URS ranks agents by score, and how GPR handles agent reservation.

If you would like to evaluate Genesys Predictive Routing for use with service-level routing or business-objective routing, contact Genesys Professional Services for a review of your routing environment.

If your environment uses multiple URS instances receiving interactions from a single T-Server, the only criterion used to select the next interaction for routing is priority.

This topic assumes that you are using a virtual agent group (VAG) as the target for your routing. If you route using a skill expression to identify your targets, convert it to a VAG string expression using the IRD MultiSkill or CreateSkillGroup function before passing the resulting string as an argument to the ActivatePredictiveRouting subroutine. See Using Agent Skills for Ideal Agent Selection in the Supplement to the Universal Routing 8.1 Reference Manual for more information.

The graphic in this section shows a very general interaction flow using Predictive Routing. Refinements to the flow depend greatly on details of your environment. Key aspects that differ in various environments:

How the Strategy Subroutines work

The following sequence provides a basic overview of the way the various GPR subroutines work together to evaluate agent scores and determine the best match given the currently available agents and the currently waiting interactions.

Important
If your routing strategy uses the SelectDN and SuspendDN IRD functions instead of a Routing Block, consult with Genesys Professional services about how the ActivatePredictiveRouting, GPRIxnCompleted and GPRIxnCleanup subroutines can be integrated into your strategy. 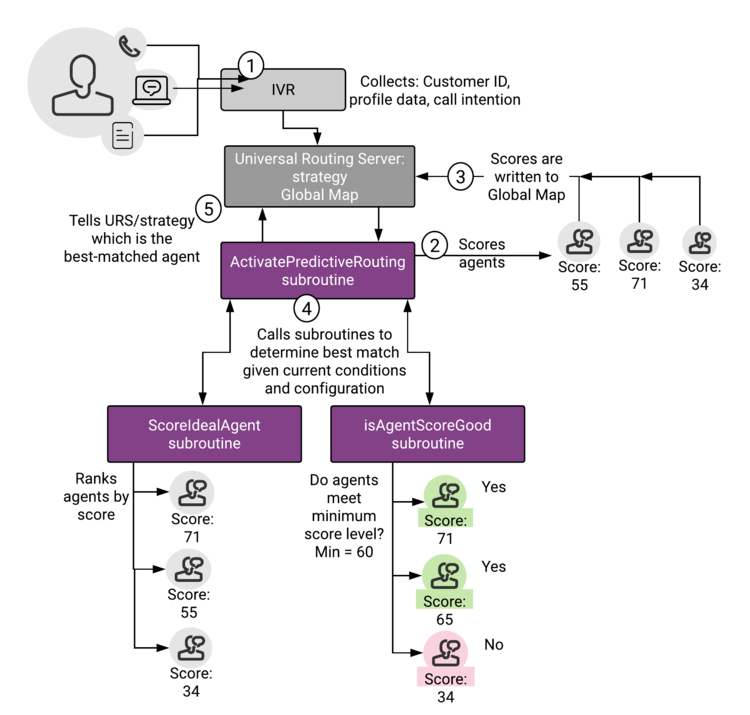 When you are using Predictive Routing to route interactions, there are two main scenarios that affect how this matching plays out:

In this case there are agents logged in and in the Ready state who can respond to interactions immediately. From a Virtual Agent Group that is defined by skill expression, URS first tries to route an interaction to an agent with the best score, using the following process to match agents and interactions:

When URS takes an interaction from the queue:

When interactions are waiting, URS uses a number of criteria to decide the order in which it directs the interactions to the best target. In general, URS uses the following hierarchy:

gpmStatus and gpmSuitableAgentsCount are KVP values written in the Genesys Info Mart database when an interaction is routed using the GPR subroutines. (You can also retrieve the values by using the GPR API to query the score log.)

These KVP values, when analyzed for different interactions over a representative day or week period can help you understand your contact center traffic and GPR performance. The following table indicates certain scenarios and how to interpret them.

How Interactions are Sorted within the Queue 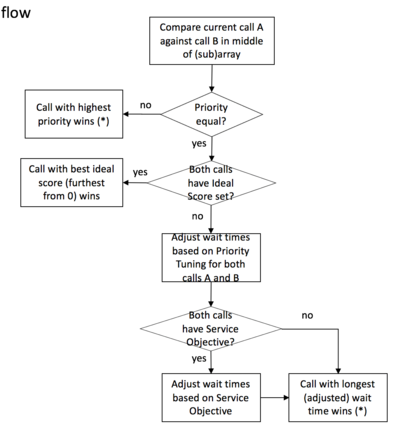 Outcome: C3, C1, C2 (the example assumes that interactions are taken from the left end of the array)

Five calls arrive at a contact center and are placed in either the Predictive Routing queue or a conventional queue:

After that determination occurs, the remainder of the flow is the same as that given in the agent-surplus flow above. Use the relevant Predictive_Route_DataCfg Transaction List Object configuration options to set up the priority increments.

To avoid having interactions lingering in a queue for an excessive amount of time, URS can trigger an escalation in interaction priority after a time delay that you set. To speed up interaction handling, you can incrementally relax the minimum skill level required for agents to handle the interaction or expand the pool of agents to consider.

Each time a routing strategy tries to route an interactions, it calls the ActivatePredictiveRouting subroutine. After each failed routing attempt, the strategy checks how long the interaction has been waiting in the queue and, if the time in queue is above a certain threshold, it routes the interaction to the next available agent, no matter their score for the interaction.

Use the relevant Predictive_Route_DataCfg Transaction List Object configuration options to set up the priority increments.

When your Genesys environment contains multiple URS nodes, they might compete to distribute interactions to the same pool of agents. URS uses agent reservation functionality to resolve which interaction should be routed to a particular agent. For details, see the agent_reservation option in the Universal Routing 8.1 Reference Manual.

Note: If you are using Service Objective, or Prediction/What-if routing, consult Genesys Customer Care for how to agent reservation works in these scenarios.

For non-GPR interactions when the URS automatic_ideal_agent option is set to a positive value (the recommended configuration):

For non-GPR interactions when the URS automatic_ideal_agent option is set to false:

This example has a scenario similar to Example 2a, but the max-score and automatic_ideal_agent have different values.

Two URS nodes have the automatic_ideal_agent option set to 4500. The Predictive Routing max-score option is set to 10000. URS node 1 targets a GPR interaction to an agent for which the GPR Core Platform has assigned a score of 6000. According to the formula for the calculation of ar-priority-1 (see the beginning of this section), the agent's adjusted value is (100 - (10000 - 6000))=-3900. Concurrently, URS node 2 targets a non-GPR interaction to the same agent, who has an ar-priority-1 value of (100 - 4500) = -4400 for that non-GPR interaction. Based on these values, the SIP Server/T-Server handling agent reservation assigns the GPR interaction from URS node 1 to the agent.

To test how GPR handles routing on your queues compared with skills-based routing, you can configure an A/B (comparison) test. GPR handles a specified percentage of interactions (GPR on) and the rest are routed by your original routing method (GPR off).

Instructions for configuring both 50/50 and non-50/50 time splits follow.

Notes on how A/B testing works

For a 50/50 comparison test split, set the ab-test-time-slice option to a positive value. This is the time, in seconds, for each routing method to run (the time slice).

If you do not configure this option, A/B test periods are hourly by default. For more information, see the complete description of the ab-test-time-slice option.

GPR uses the following formula to determine the GPR Mode for a particular call when you configure a 50/50 test time split:

Using this start timestamp and when the ab-test-time-slice option is set to 86400 seconds (24 hours), the result for the calculation will enable GPR for all interactions coming on this day. For the next day, GPR will be turned off for the whole day.

Consider an example scenario where the timestamp value is 1653052118, the dayofyear value is 140, and the hourofday value is 13, applying the formula gives the values:

In this scenario, GPR is enabled.

Similarly, consider an example scenario where the timestamp value is 1653049472, the dayofyear value is 140, and the hourofday value is 12, applying the formula gives the values:

In this scenario, GPR is disabled.

If you would like to move GPR into production but monitor the benefit at the same time, Genesys recommends using a non-50/50 split. To set the comparison test time periods to a non-50/50 split, specify values that produce the desired time split in the following two configuration options:

If you leave these options at the default settings, the comparison test defaults to a 50/50 split, with interactions routed half the time using GPR and half using skills-based routing. The on/off periods (time slices) are defined by the value set in the ab-test-time-slice option.

Example configuration for a 90/10 split

Example configuration for an 80/20 split

To get high-quality results from comparison testing, the test must run long enough to smooth out any unusual occurrences or statistical anomalies in the data. The further the split is set from a 50/50 ratio, the longer the comparison test period should be to achieve a high-quality test.

GPR uses the following formula to determine the GPR Mode for a particular call when you configure a non-50/50 test time split:

Using this start timestamp and when the ab-test-gpr-on-period is set to 28800 seconds (8 hours) and ab-test-gpr-off-period to 7200 seconds (2 hours), applying the formula will result in disabling GPR for this interaction.

Retrieved from "https://all.docs.genesys.com/PE-GPR/9.0.0/Deployment/ixnFlows (2023-01-31 13:10:07)"
Category:
Comments or questions about this documentation? Contact us for support!
Download a PDF