Genesys Predictive Routing (GPR) provides subroutines components that are integrated with your Genesys Routing solution. The subroutines are placed within an existing strategy, where they add agent scoring and best-match functionality that enables you to fine-tune the routing of a specific interaction to the agent who can best handle it, based on the KPIs you want to optimize.

About the URS Strategy Subroutines component

This topic explains how to use the preconfigured strategy subroutines with Interaction Routing Designer (IRD) and Universal Routing Server (URS).

This topic includes the following information:

Important
If you would like to evaluate Genesys Predictive Routing for use with schedule-based routing (using Genesys Workforce Management), service-level routing, or business-objective routing, contact Genesys Professional Services for a review of your routing environment.
The following is a high-level overview of the steps required to deploy the URS Strategy Subroutines:

NOTE: Genesys does not support custom subroutines for Predictive Routing in a hybrid environment.

To download and import the GPR Strategy Subroutines into your routing environment, perform the following steps:

NOTE: When you select a subroutine to view its properties, the Location file property is empty. If you try to open one of the GPR subroutines, an error message appears stating that the RBN file is not accessible (as shown in the image below). This is normal expected behavior. It means that the import was successful and you can now invoke the GPR subroutines from the routing strategy with the required inputs. 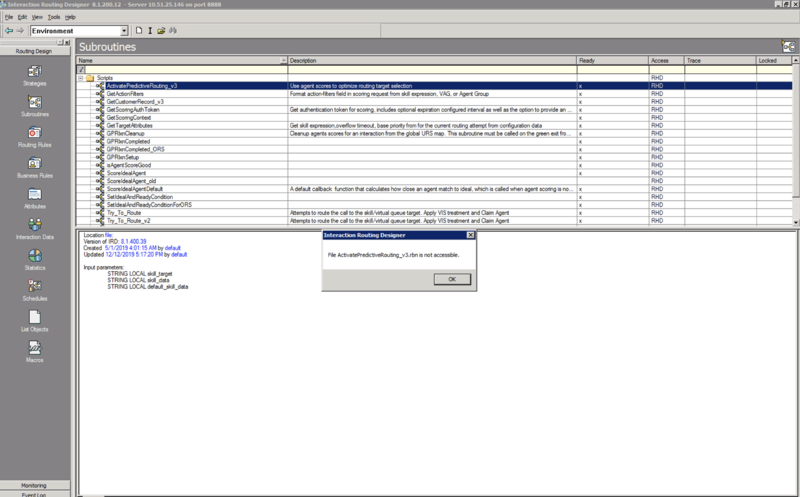 What is included in the installation package

The IP for the URS Strategy Subroutines component contains the following files and folders:

The URS Strategy Subroutines support non-ASCII encoding (by default, all GPR components use UTF-8 encoding). The subroutines specified below include enhancements for non-ASCII environments:

WFM enables contact center managers to better manage their workforce with accurate staffing plans that take into account the following:

See the following documentation sets to to learn more about WFM:

Perform the following steps to configure URS to work with GPR:

Set the recommended values for the following options

To use the strategy subroutines provided with Predictive Routing, perform the following steps:

Set values for the configuration options in the Predictive_Route_DataCfg Transaction List Object.

The GPRIxnSetup subroutine does the following:

To report non-GPR calls in the score log and the Genesys Info Mart Database, set the value of the URS prestrategy option to GPRIxnSetup.

The GPRIxnCleanup subroutine must be called from the default port of the last Routing block used for Predictive Routing. This subroutine correctly identifies abandoned interactions and interactions in which GPR was unable to route the interaction and add this information to the score log and the Genesys Info Mart gpmResult KVP. The KVP values used are the following:

GPR does not report on abandoned calls by default. To enable this functionality, configure the GPRIxnCleanup subroutine as follows:

Configure Reporting on Both GPR and Non-GPR Interactions

There are a number of scenarios in which interactions routed using GPR and those routed using alternative methods (non-GPR) might target the same pool of agents:

Important
If routing fails for a non-GPR interaction, or it is abandoned, GPR does not record these status conditions. For GPR the following is recorded: gpmResult = 15, gpmMode = off, gpmMessage = Predictive Routing is turned off or not used for this interaction.

To configure your routing environment to handle both GPR and non-GPR routed interactions, perform the following steps:

The URS Strategy Subroutines use the value of the START_TS variable to calculate when the interaction arrived in the queue. START_TS is a mandatory variable passed in the default_skill_data List object and stored as a KVP for use in Genesys Info Mart reporting.

You might choose to turn predictive routing off temporarily for A/B testing or troubleshooting. To do so, use one of the following methods:

Upgrade to a new Subroutines release

NOTE: If you are using custom subroutines, contact your Genesys representative before upgrading.

Retrieved from "https://all.docs.genesys.com/PE-GPR/9.0.0/Deployment/cfgSubroutines (2023-02-09 03:17:33)"
Category:
Comments or questions about this documentation? Contact us for support!
Download a PDF