Learn to understand and use the Intent Accuracy Report feature.

What is the Intent Accuracy Report?

The intent accuracy report is a visual representation that depicts intents that can be mistaken for others intents by your bot. The intent accuracy report shows an overview of the predicted intent vs the expected intent. It can help you understand why the bot predicted an intent as Intent X instead of predicted it as Intent Y. The number of correct and incorrect predictions are summarized with count values and broken down by each intent. The expected intents are shown as rows, the predicted intents are shown as columns.

When to use the Intent Accuracy Report

You can also use the Intent Accuracy Report whenever you add more utterances or newer intents. This report will indicate how your bot will perform when the new changes are included. 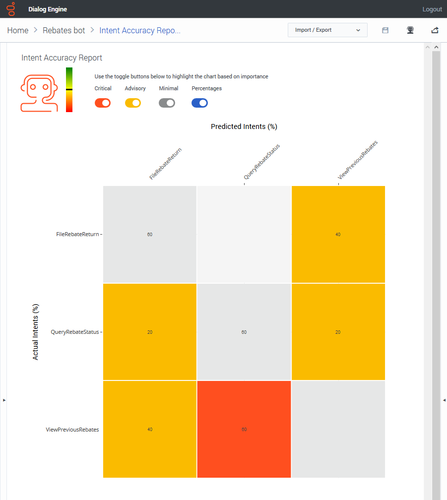 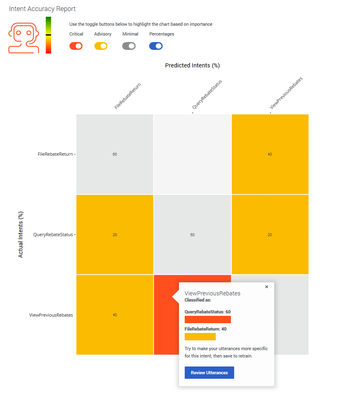 You can toggle the display of the Critical, Advisory, and Minimal highlights. You can view the percentages for each marked cell by toggling the Percentages option.

For example, if you want to view only Critical intents and the Percentages: 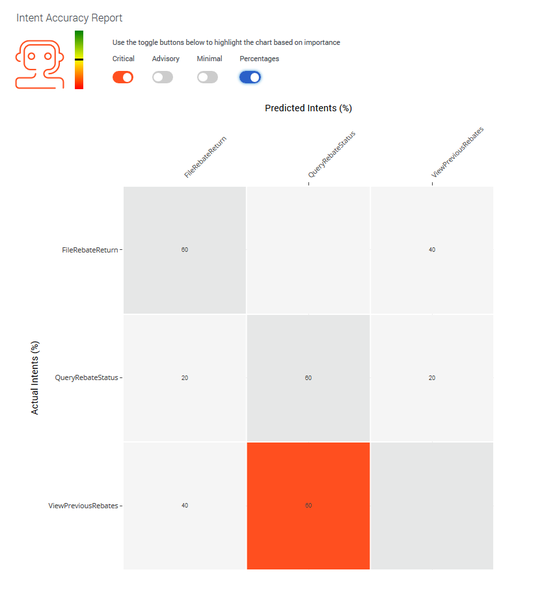 How to improve the Intent Accuracy Report

If your intent accuracy report shows that you may need to make improvements by showing Critical or Advisory intents, you can try these top tips:

Retrieved from "https://all.docs.genesys.com/GDE/Current/User/Intent_Accuracy_Report (2022-12-07 12:47:53)"
Category:
Comments or questions about this documentation? Contact us for support!
Download a PDF