From Genesys Documentation
(Redirected from PEC-ROU/Current/Designer/AppStruc)
Jump to: navigation, search
This topic is part of the manual Designer User's Guide for version Current of Designer.

Learn how to use builds and streams to manage the Designer application development workflow.

Designer uses a stream-based workflow for developing applications. In this type of model, an application consists of multiple work streams, each of which represents a different stage in the life cycle of the application:

When you want to freeze the current state of the application code, you can generate an application build and assign it to a stream. The build can then be promoted to the QA and UAT streams until you are ready to assign the build to LIVE and run it in the production environment.

This type of workflow enables you to have multiple builds of the application running in different streams, completely independent of the others. For example, a developer can work on a build without impacting the build that is assigned to quality assurance or the build that is actively running in production.

This video shows the workflow in action: 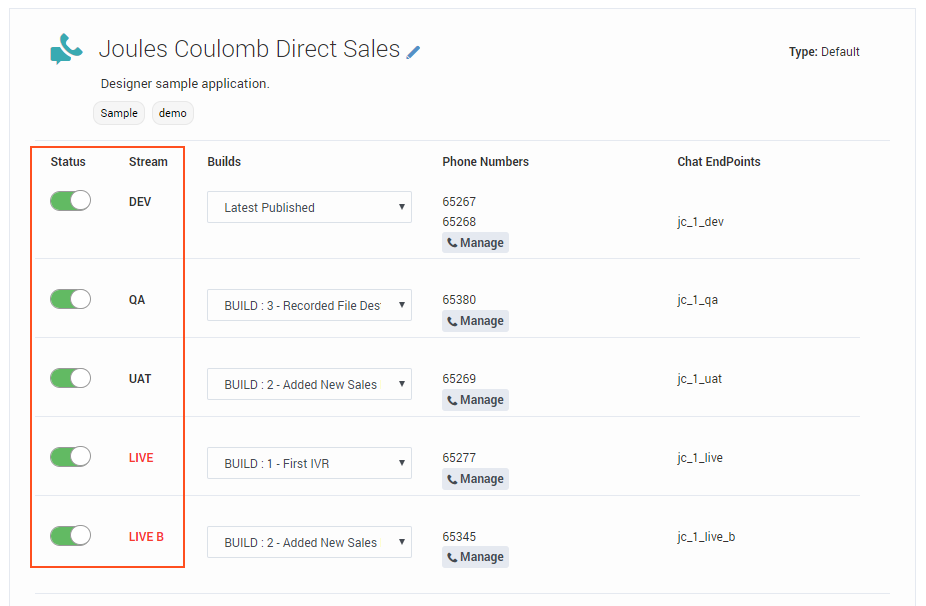 There are four application streams:

This stream always runs the latest published version of the application code. As such, it is the only stream affected by Designer upgrades.

For builds that require beta-testing or some other variation of user-based trials.

For builds that are actively running in the production environment.

This is an optional stream that can run a second application build in the live production environment. For more information, see LIVE B streams.

All streams are enabled by default. You can use the Status sliders to enable or disable them as needed.

A build is basically a self-contained package of the application code. It has all of the resources it needs to run, so you can assign a build to a stream without worrying about impacts to the original resources or to the other builds.

To create a build, open the application in editing mode and click Build:

Designer automatically adds or increments the version of the build. You must assign the build a Label and, if desired, you can use the Note field to provide any additional information about the build. When you are finished, click Build. 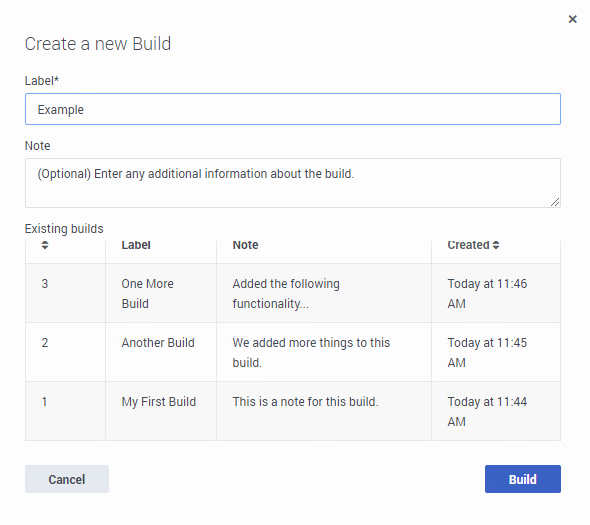 Things to keep in mind when working with builds:

To manage the builds for an application, use the Manage Builds option when viewing the application properties.

The Parallel Test Environment enables you to use test resources instead of production ones when running an application build in a non-production stream.

To enable this option, go to the Misc tab in the application settings and select Enable for PTE. You can then create copies of certain resources and add a special test_ prefix to the resource name.

Streams that are running non-production builds (DEV, QA, and UAT) will reference the PTE versions of the resources (test_<resource name>) instead of the ones being used in production. The LIVE build continues to reference the original production resources.

You can run an optional LIVE B stream in addition to the existing LIVE stream. This allows you to run a second application in LIVE production mode, which gives you greater flexibility in how you can introduce new application builds into your production environment.

For example, each LIVE stream can have different contact points assigned to it, so one way you could use the LIVE and LIVE B streams is to allocate interactions coming from a certain region to a particular stream, or use the streams to balance (or gradually introduce) the number of interactions being handled by a new production build. In this way, you can implement a form of A/B testing.

Let's say you wanted to split or balance the number of interactions being handled between the LIVE and LIVE B builds. Typically, you would gradually introduce more interactions from LIVE to LIVE B, which could be done as follows: