Manage DID Groups with IVR Administration

All procedures begin in the DID Groups Main Page.

What is a DID Group?

Direct Inward Dial DID (DID) groups offer a more precise alternative to standard IVRs (press 1 for Sales, press 2 for Support, etc.). You would likely define a DID Group for each of those departments. The numbers listed in this function are the exact numbers that a person would need to dial to be connected directly to the respective team.

Why to create, provision, or modify a DID Group?

You might have a person join as a new training engineering supervisor. If you want to take special action when this person calls, then, you might have a DID Group for “special people”. You could give this person their own telephone number (provided by the telephone company) that they can call. This number could be added to that DID Group.

The application that is triggered when calling in (ref: IVR Profile Name) could be one that specially compares the number that was dialed with the number that the special person is calling from (Automatic Number Identification - ANI), and use that as an authentication method to validate the person without asking any questions.

So, DID group is a sorting/categorization feature which can be leveraged to provide special actions to people that hold a special number. Or, if not leveraged, then, the group might simply be named “XX Airlines – CFD (customer front door)", and, have only a single number listed (1-800-XX-ESKY).

Create a new DID Group 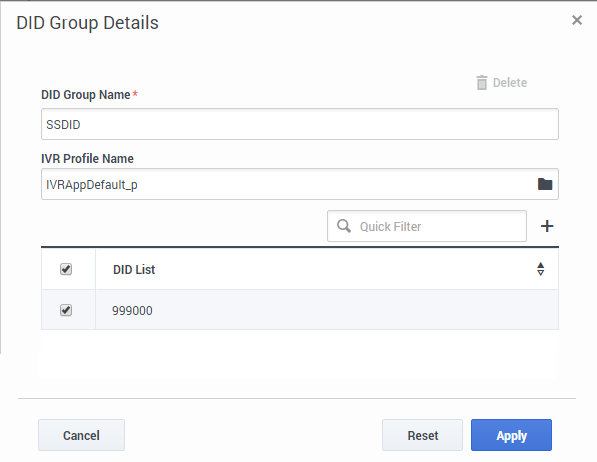 Optional Quick Filter field: Enter text to limit the number of DIDs displayed, or click plus (+) to query for additional DIDs not displayed.

Modify an existing DID Group 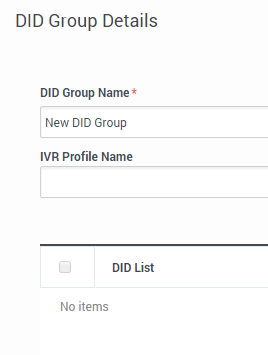 Remove items from the group

Sort an existing DID Group

The list of DIDs in the group is sorted. You can re-sort the list, but you cannot unsort it.
Retrieved from "https://all.docs.genesys.com/PEC-IVR/Current/Administrator/ManageDID (2023-02-09 03:39:20)"
Category:
Comments or questions about this documentation? Contact us for support!
Download a PDF